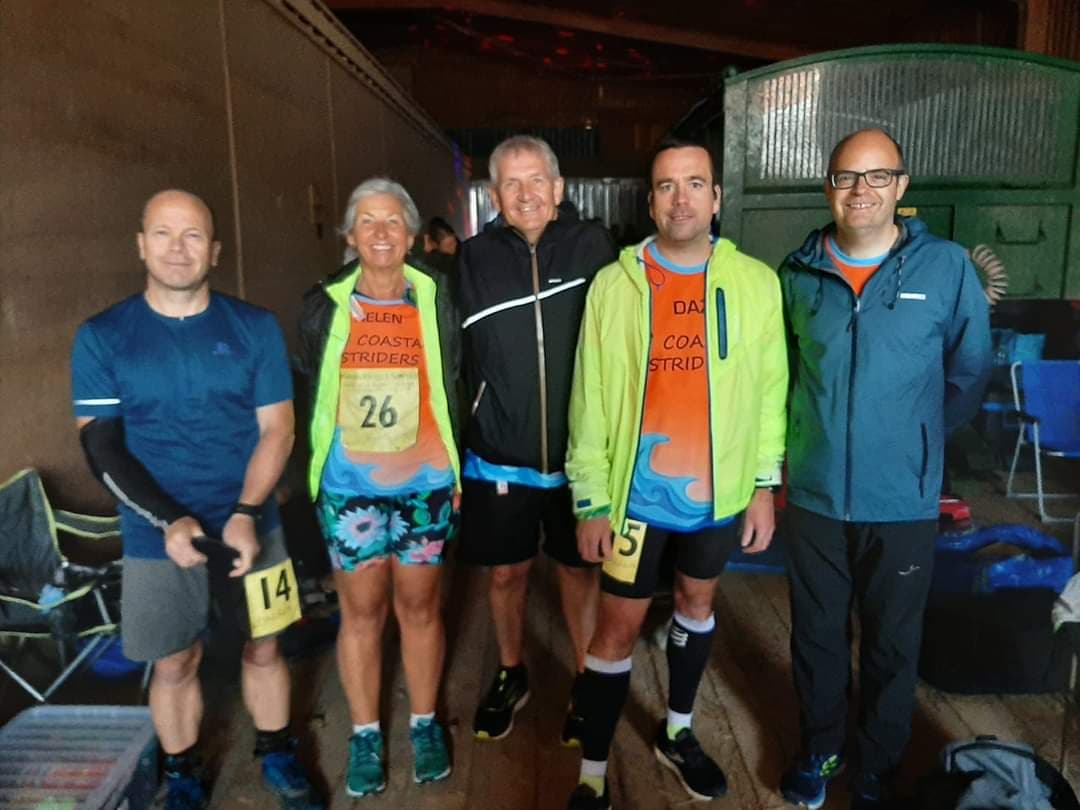 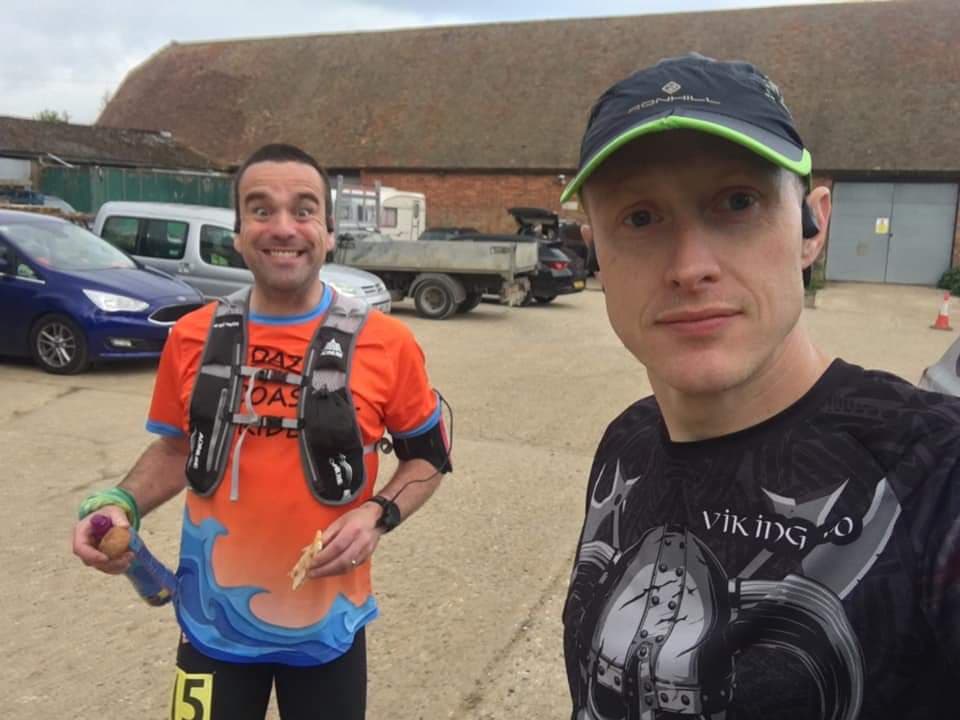 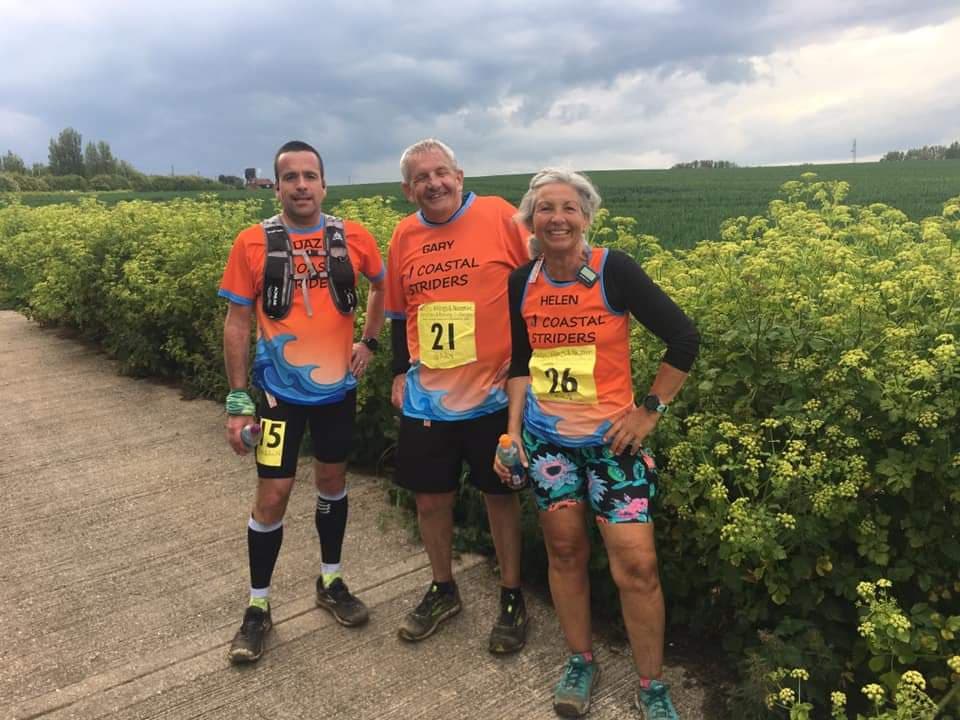 My 100 Mile Journey started back in March 2018,  where I offered to pace Simon Ballard & James Patterson through the night on their first 100 miler, and seeing what those guys went through, I said the 100 miler was not for me, and that I would never do one. I then returned the following year to pace them through the night. However, this time it was at the Samphire 100, they also had a new 100 miler recruit on board - John Whitcher who was doing his first 100. All three of them completed it which led me to start to wonder to myself, maybe I could do this????

Then the Email came through from Traviss at SVN, Special offer Viking 100 2020 entry Reduced from £150 to £100,  one week only. Seemed like a bargain to me, only £1 per mile, so I thought what the hell lets go for it and I signed myself up.

The date of the 2020 Viking 100 came round and was unfortunately postponed to 2021 due to the Coronavirus pandemic. That was quite a sigh of relief as I had not really done that much training for it.

Luckily all the Covid restrictions were lifted just in time for the 2021 Viking 100 to go ahead. I was feeling pretty good about the event until about a week before. Even though I had done hours and hours of training for it, I still had doubts entering my head; I was asking myself can I do this??

The Day of the event arrived, I woke up early and packed everything apart from the kitchen sink into the car before heading over to Brook Farm, picking up Simon Clayton on route.

It wasn’t the best of mornings; we were faced with quite persistent rain but luckily the wind had dropped significantly from the day before. Upon entering the Barn, we were greeted by Helen & Gary who had already set up all their kit and were raring ready to go.

Traviss started his Race Briefing right on the dot, starting at 7:50. There were 109 other runners that thought this was a good idea alongside me, all ready to go. The run started at 8:00 after one final wee stop, me and Darren Ryan were off on our first of 16, 6.25-mile loops. We headed out quite happily out of the barn area up the hill and then we took a left turn into the farmer’s field. OMG! The amount of mud there was, well, you had to see it to believe it. We were like Torvil and Dean Slip sliding all over the place. How we didn’t end up face first in it, I don’t know. 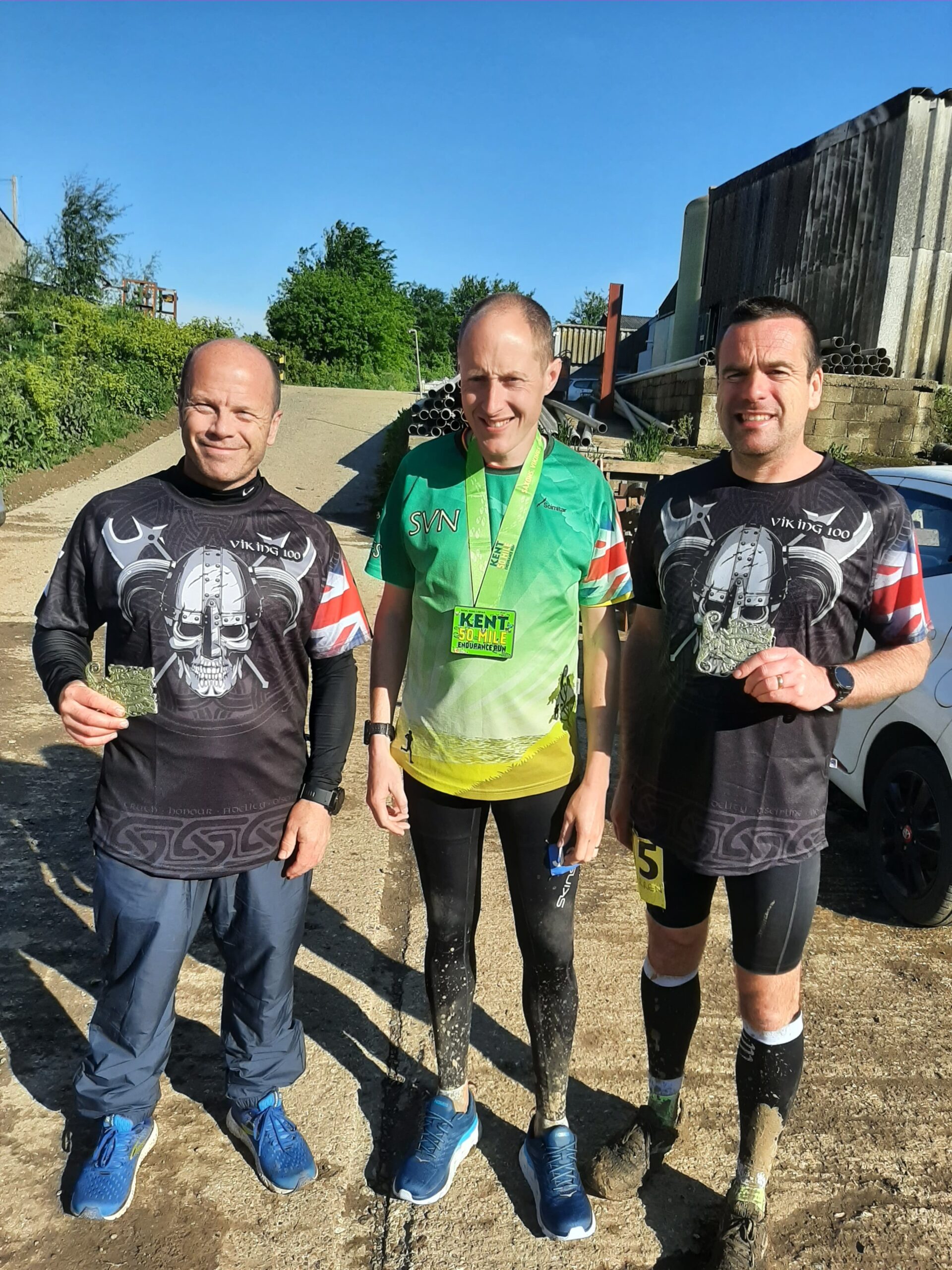 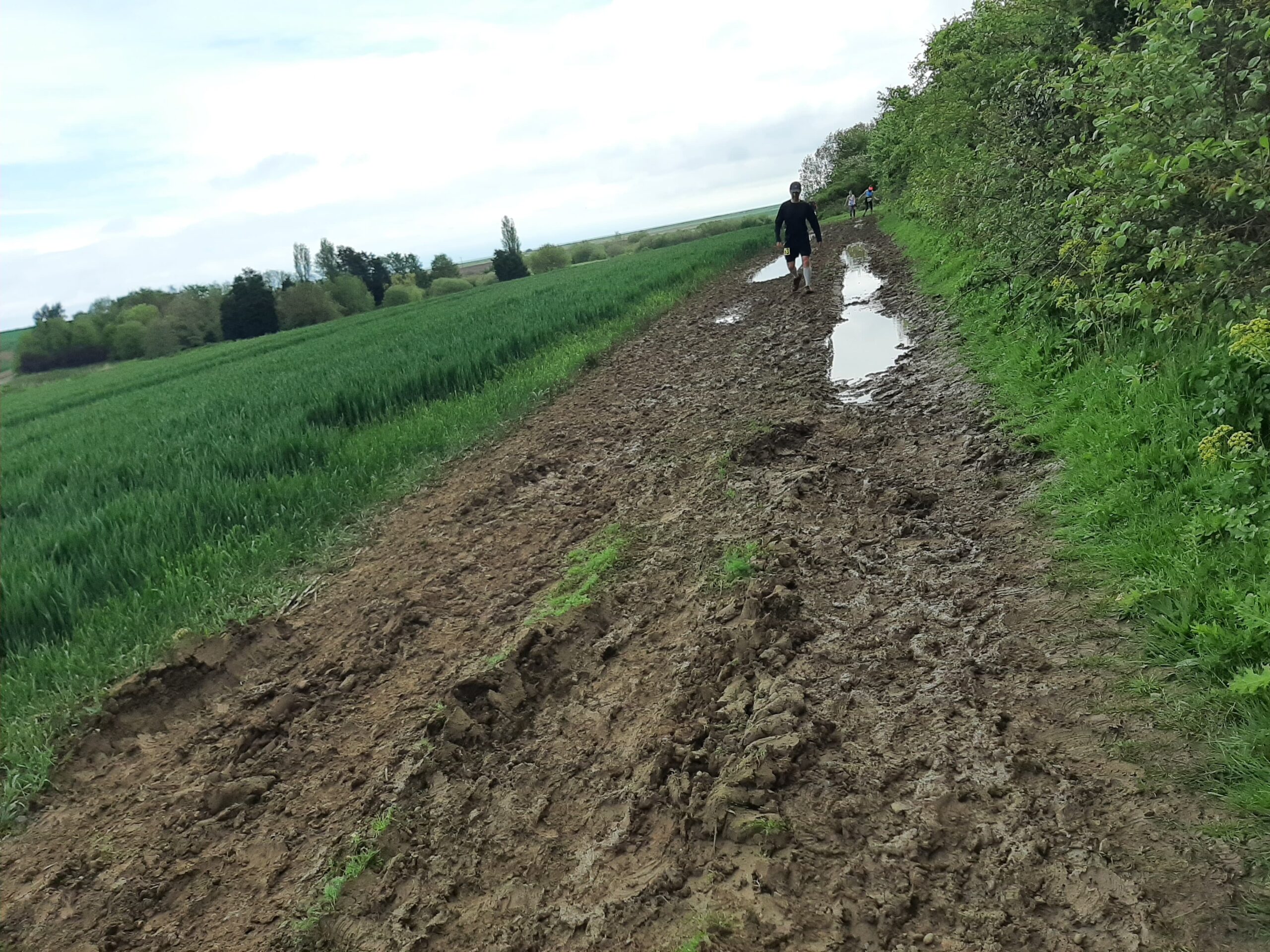 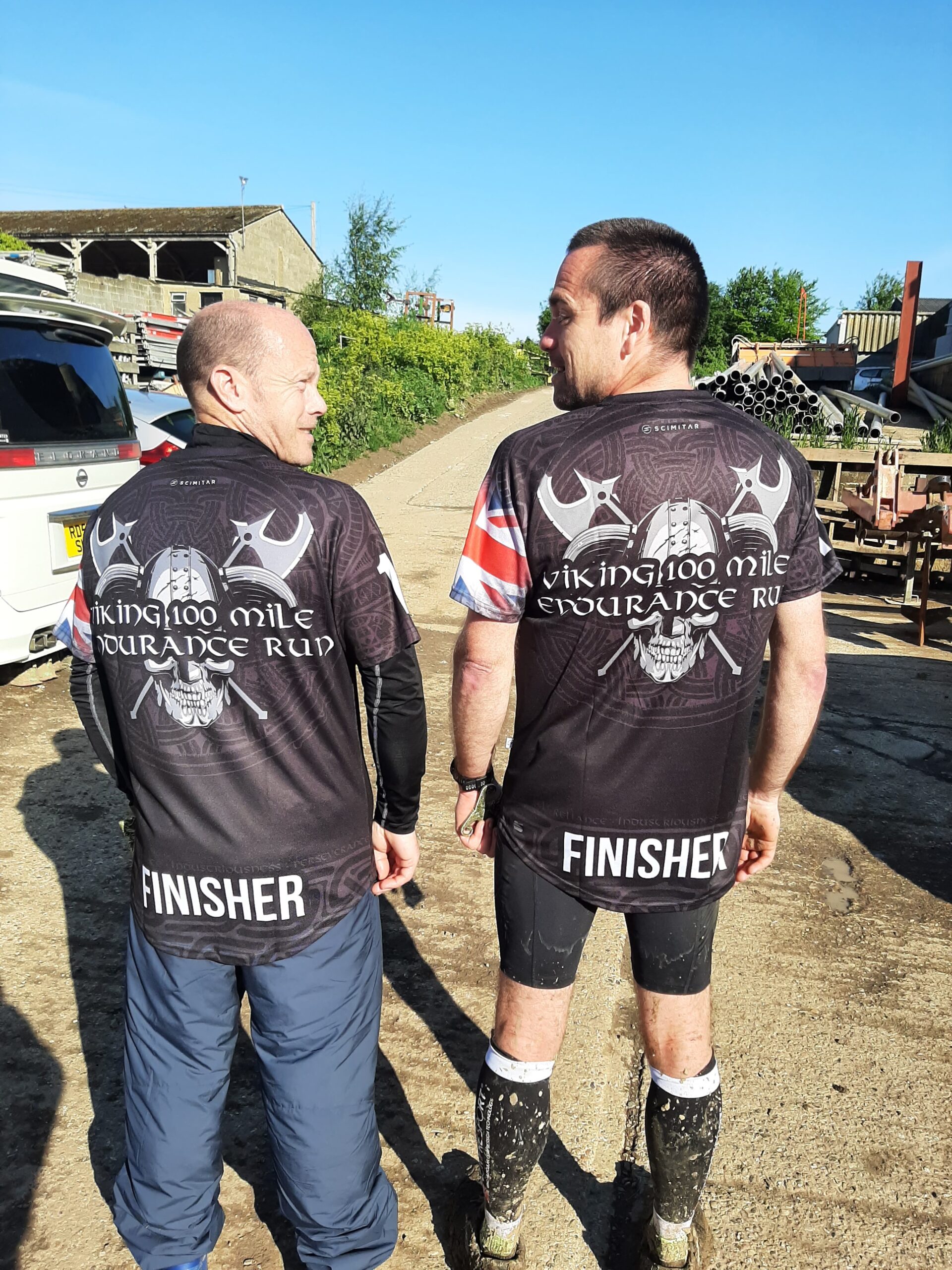 The Run then headed up the side of the Thanet way towards Ramsgate, until you got to Jelly baby Junction, which was hosted by Mark, Sharon and Derek. They had an aid station which was fit for a king, full of goodies, drinks, and the home of the most amazing lemon drizzle cake. You then went across the bridge over the Thanet way through another muddy field before heading towards the Wantsum Brewery & Taproom in St Nicholas. (This was the furthest point where you would loop and come back.) By mid-morning the rain had stopped, and the sun was making the occasional appearance which helped dry up some of those muddy paths.

The great thing with the route was that you were always passing runners coming the other way and no matter whom they were, words of encouragement were constantly thrown back and forth which was great. It was also nice to see so many familiar Coastie faces along the route cheering you on, it is always good to see a friendly face in a race to give you a good boost.

At about 16:00 I was joined by James Patterson, who kindly offered his services to pace me through the night until I finished.

The First 50 all sort of went to plan but then I was into unknown territory as I had never attempted to run more than 50 miles before.

Early evening came and with that so did more rain, which made the nearly dried up muddy paths into Mud baths once again. The sunset around 21:30 set a new challenge of going through the muddy paths in the dark with just a head torch, now that was fun. We ran through about 7 hours of darkness before the sun came up and finally the end of this mammoth challenge was in sight.

We passed by Jelly baby junction for the final time where we had the best tasting Bacon roll, I have ever had before heading back to the Barn. On arrival at the Barn 23 hrs 35 mins after I had started, I was done!!  We were greeted by Darren Ryan who had finished about an hour prior to me, then Traviss presented me with my Gold Buckle and Finishers T shirt. It was then that it dawned on me, I had done it, I had run 100 miles and achieved something that I never thought I would do. The Challenge was over.

I would like to say a big Thank you to Traviss, Rachel and their Crew for hosting the event and would like to thank all those that came over to support us during the day & night. You guys made it that little bit easier and you don’t know how much that helped.

Also, I would like to say a Massive Well done to Gary Channing, Simon Clayton & Darren Ryan on completing their 100’s and to Helen  on completing  56 miles. You were all awesome and should be very proud of yourselves.

And finally thank you to James Patterson & Darren Ryan for getting me through the 100, and to you guys that have trained with me on the long runs and the short ones which all helped to get me there.

Not going to lie, the run did have some low points, but the high points well outweighed them. Would I do it again?? Probably. 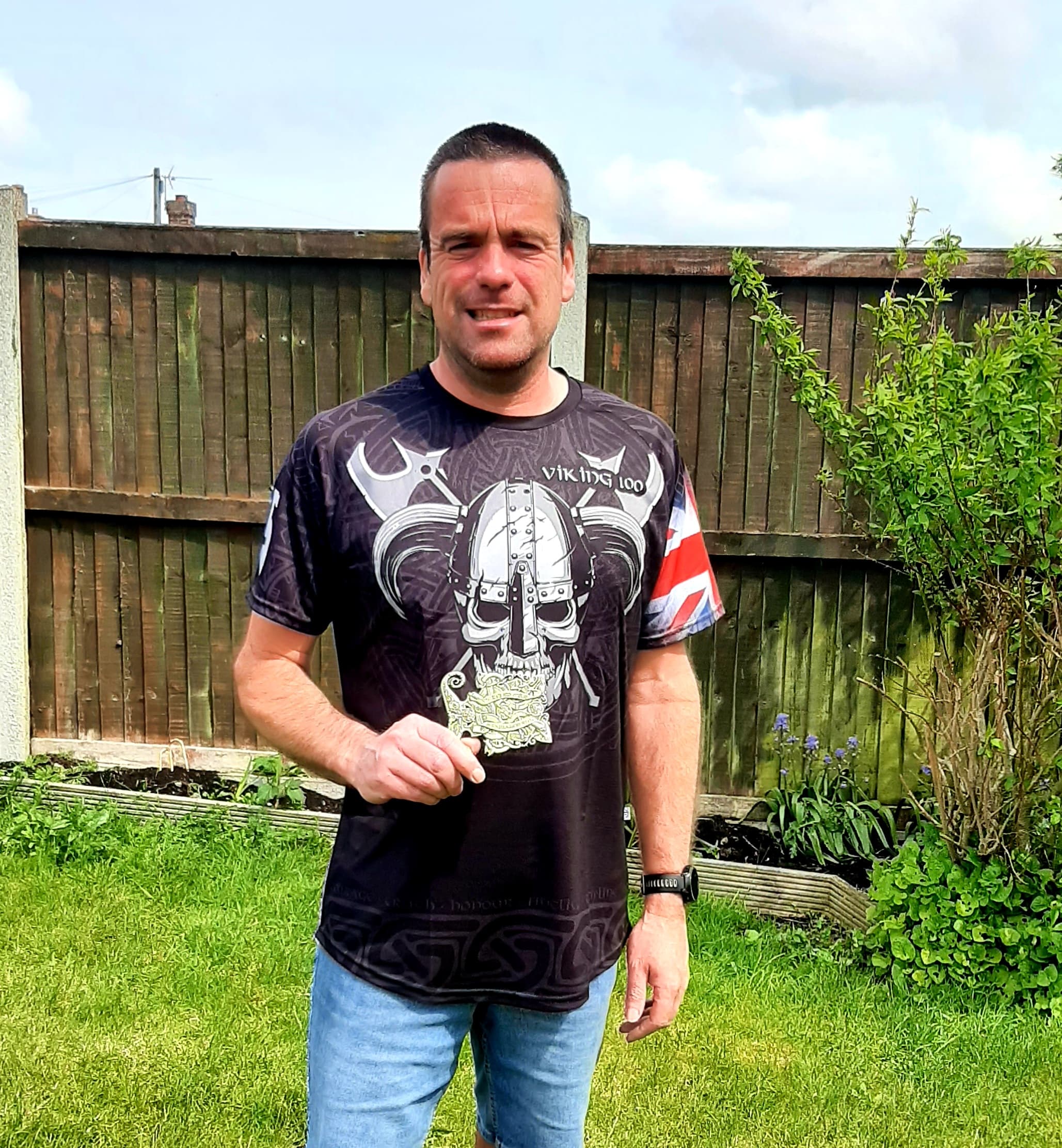 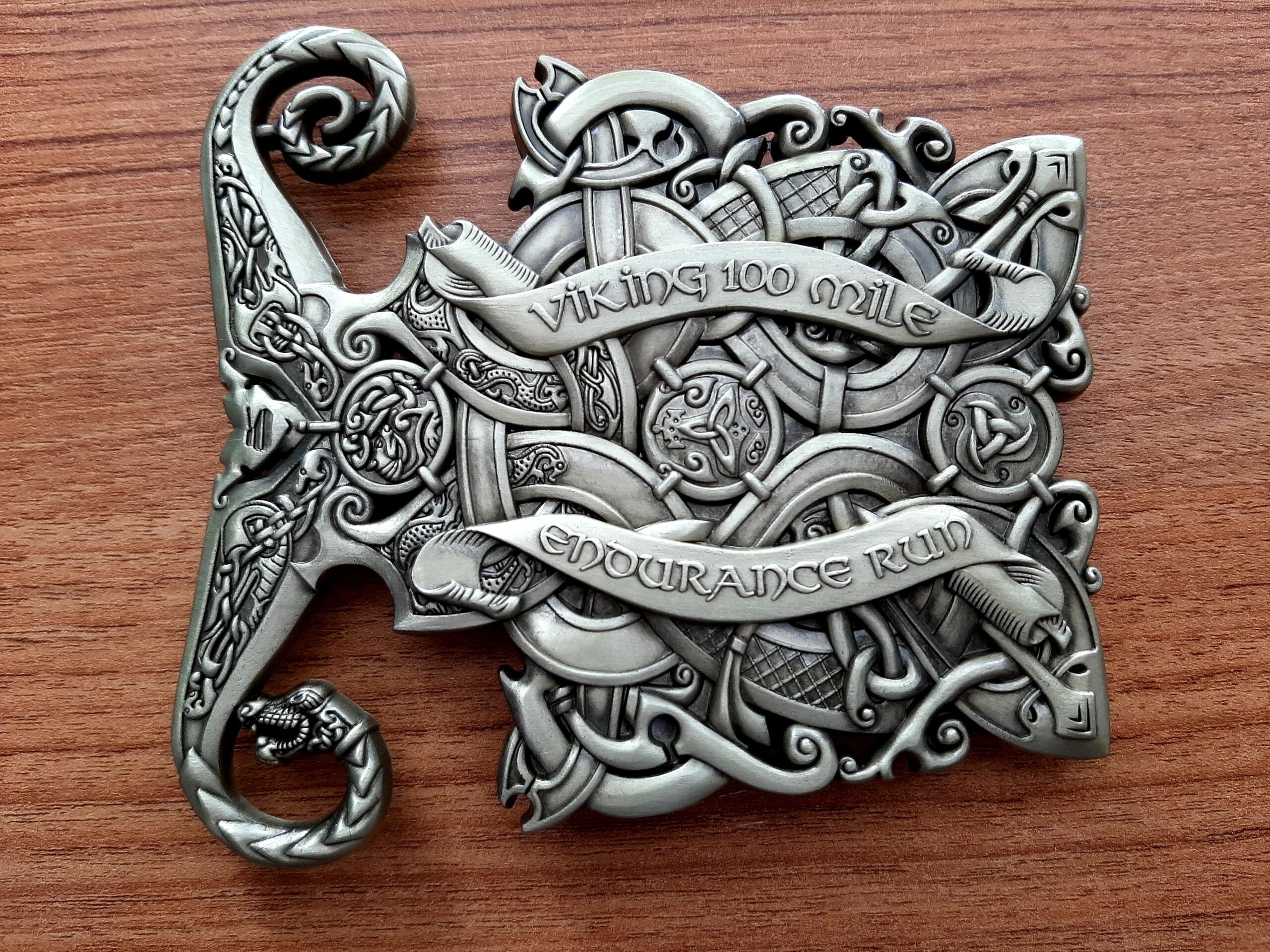