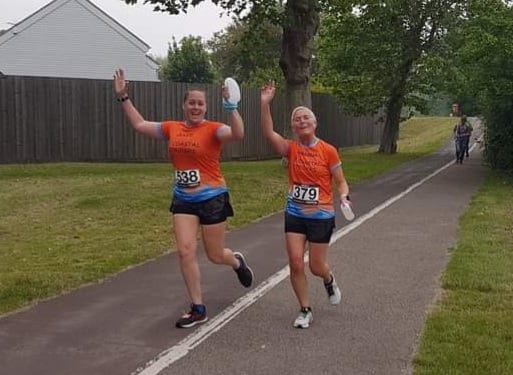 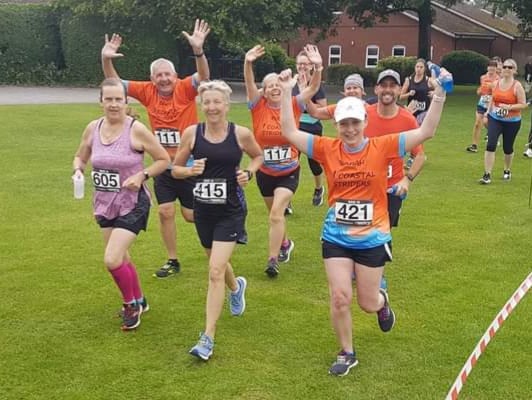 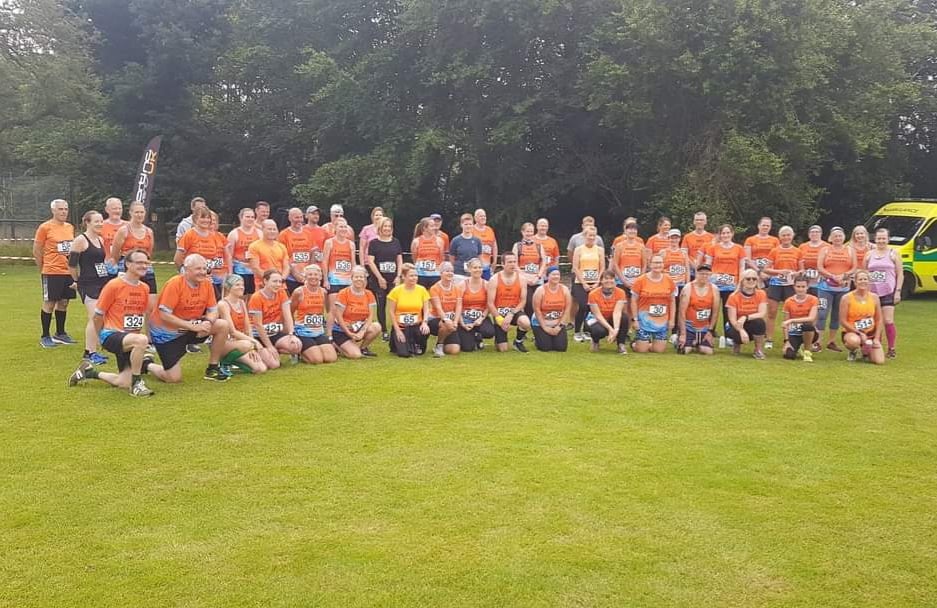 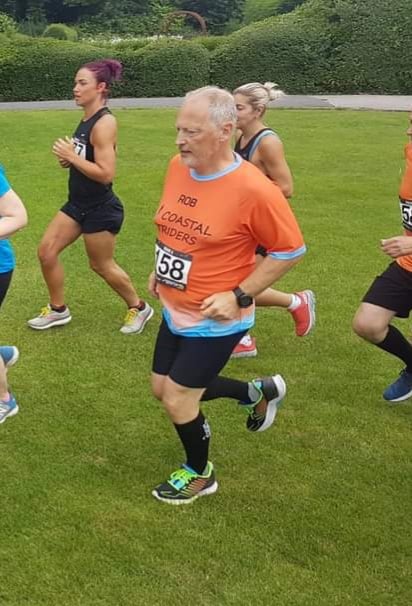 I was in two minds about booking this race back in May.  Firstly, I’d only just dipped my toe back in Club run waters and didn’t feel “race ready” at all and secondly, having run this race on a different course 2 years ago, absolutely hated that route…got stuck in a narrow lane behind a bloke in a cow suit having major udder trouble….but thats another story.

So, did some digging and confirmed that a new route through the Town centre was being offered. I Liked the sound of that and knowing the area, had no worries about the “mostly flat route” actually containing sneaky 1:2 hills like some races do.

Having persuaded my run bud and fellow Coastie Paul B to enter too (ok, having bored him senseless till he gave in), it was great to see so many other Coasties signing up as race day got nearer.

The organisers did a good job on the day, lots of parking and not much of a queue for the entry desks…..although they may have underestimated the general level of nervousness….There were 501 entrants for the race and at one point I think about half were in the queue for the Portaloos!

There was no problem spotting the Coastie contingent on the day- a mass of Orange at the top of the field; easily the largest Club attendance, by a long way.  It was great to see everyone again, made the last 18 months almost disappear!  It’s not possible to name check all 53 Coasties that ran here- plus the non running supporters-but we had a real cross section of all ability and experience ranges in the Club.

Once Darren and Lorna had herded us together for the team photo (bit of a job to find a camera with a wide enough angle to get us all in), there wasn’t much hanging around as the starting waves were processed through the start gate bang on time.

Only had time for a quick obligatory moan with the others about the weather (too hot and humid this time, as opposed to the usual too cold/windy/high above sea level etc) and then it was the turn of Wave 5 to line up and we were off!   Got off to a great start - I actually remembered to start my watch for once!

A lap of the playing field and then we were out onto the streets of Sandwich; Paul and I were aiming for a steady 5:30/km pace in the hope of dragging ourselves over the line in around 55 minutes.  Having reminded him of that at the start, I then completely got lost in the showbiz of the event and went off at 5:10/km instead.

Luckily his words of encouragement (well, I can’t write what he actually said) slowed me down and we pushed on around the main part of town, bang on pace and I was able to sort out my breathing (gasping, dribbly, snot fest) and running form (like a gerbil in a light socket) and got a real lift from the cheers of the spectators on the route and the encouragement from all the Marshals.  Although we had to share some roads with the traffic, it didn’t seem to cause any problems.

The 5km marker seemed to appear quickly, but then the humidity started to take its toll around the 7km marker, when the slight headwind on the section out to Sandwich Bay disappeared as we turned. At this point the lead runners were all heading back on their final 3km along the same route so we could shout encouragement at Dave, Daz and the fast Coasties as they motored back for some quick finish times.

Had to dig deep to keep up the pace as we headed back towards Sir Roger Manwood’s school, as the 8th km lasted for about five miles by my reckoning and we were busy fighting off a duo from another club who had picked up their pace in anticipation of the finish.

As we entered the school grounds for the final lap of the field, the adrenalin kicked in and I even managed an extra sprint to the finish, seeing off the competition and getting a time of 55:04, bang on target and a new PB!
It was then time to stop dying, grab a bottle of water and cheer in the other Coasties as they came into the final stretch (and there were so many! even my dodgy maths worked out Coasties were over 10% of all the runners).

The overall winner crossed the line in 31:25, an amazing time and 2 minutes ahead of his nearest rival.  Darren Sayer was the first Coastie to finish, in 42:09, followed closely by Dave Paramor in 42:18.  A great effort by both.

As ever, our Club Captains Lorna and Darren were fantastic in rallying us before the race and supporting every single one of us over the finish line.   Our club spirit is one of the things I love about The Coasties- unlike some clubs there, we all stayed and cheered every Coastie across the Finish line, right to the very last runner to finish (from another Club) and didn’t he get a bloody big cheer! Fantastic effort at 83 years of age.

So, final impressions…a well organised, Covid secure race, great Team of marshals around the course, a good, flat new route and as ever, a great bunch of people to run with. Think this race could become a regular in my running calendar from now on!