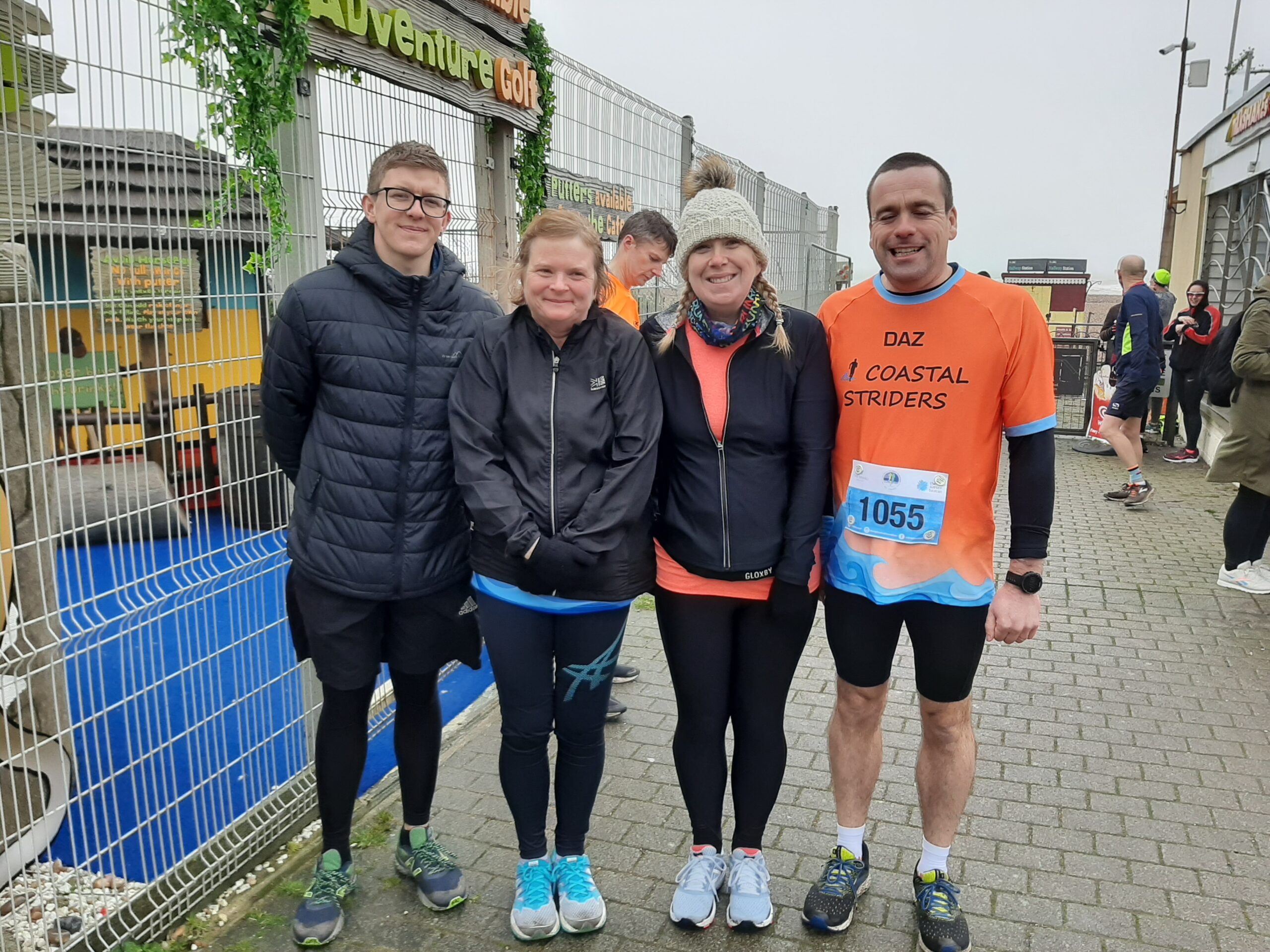 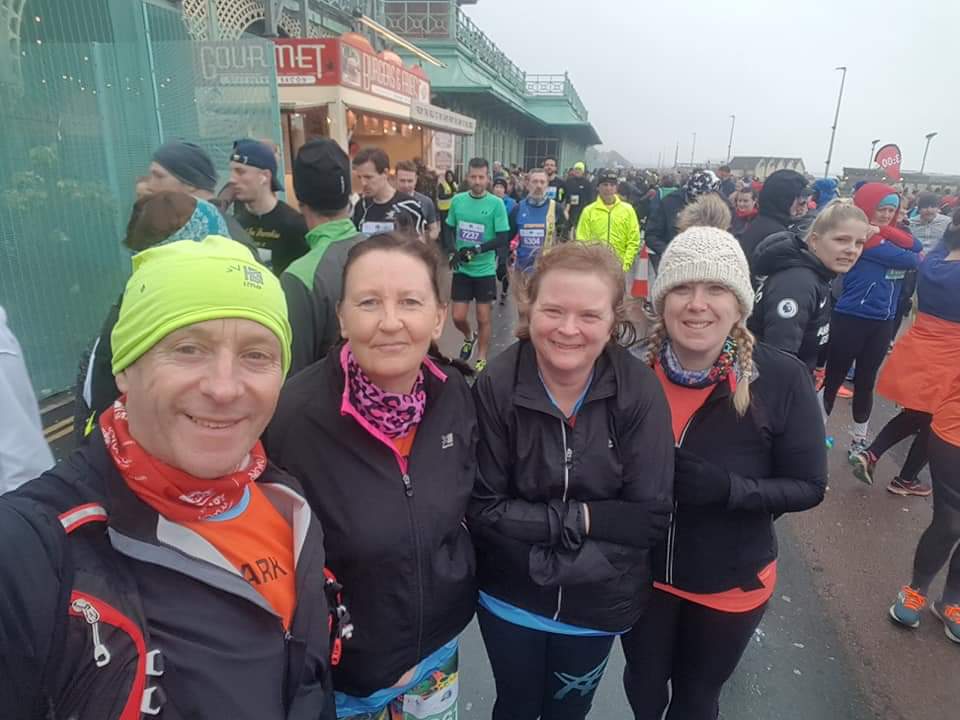 On the 23rd February 2020, the coastal striders maneuvered their way through the bustling crowd on Madeira Drive to meet outside the adventure golf course for a pre-race picture in storm Dennis. After wishing each other luck we progressed to our respective race pens, the sheer number of participants meant we may have had to jump a few barriers to get to the correct pen in time for the start.

The brutal 45 mph winds were battering us all whilst apprehensively waiting to start running, the number of participants meant a staggered start. After waiting for the elite runners, wheelchair racers and faster start pens the yellow start pen (1:45-1:59) was next, I eagerly moved forward, passed the checked flag and started my watch, and the race had started!

The route bent round in front of the sea-life centre, up Marine Parade then looped back toward the pier and up into the city passing sights such as the Royal Pavilion before heading back to the seafront. The headwind had been bad so far but nothing in comparison to turning right back onto Madeira Drive and on towards Hove. Up to mile ten was permanent headwind, however, the buzzing crowd and live band playing from the grand hotel ensured high spirits, the atmosphere throughout the whole race was amazing. Although spirits were high, words can’t express how good it felt to turn up onto Hove Lawns at mile ten and back toward Brighton pier for the home stretch with tailwind!

The last three miles were great, watching the huge waves batter the beach and spray water high into the air and onto the path in front of me. Along with the views of the old pier, peace statue and I360 the constant cheers, highfives and support from the crowd made the home stretch to the finish line really enjoyable and I felt myself speed up. The last half mile yielded even more uproar with people playing music, dancing and cheering you on, with every runner beaming from ear to ear as they charged toward and over the finish line, the race was done.

Thus ended the Brighton Half Marathon, 10 miles of headwind, 3 glorious miles of tail-wind and a lovely medal earned. I hit a new PB (1:45) which I was ecstatic about but of course action man Daz still finished before me (1:39). So far this has been one of the best races I’ve done, the crowd support and atmosphere is incredible and I highly recommend it!

Good luck to everyone doing the Brighton Marathon and well done to all of those who took part today! 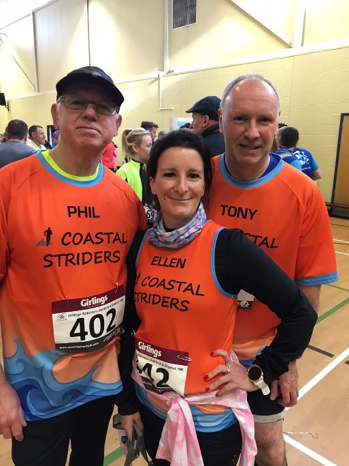 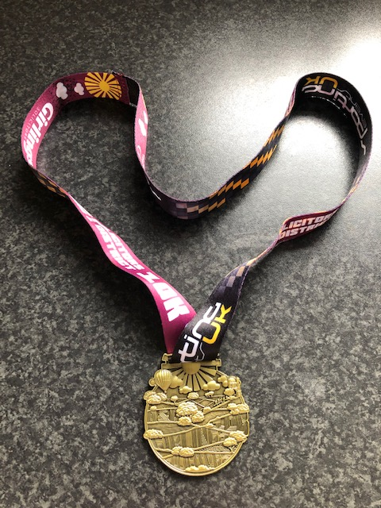 After having run every day of January for #RED January and covering about 110 miles, you would probably agree with me that a rest was a good idea. Well, I did have a well deserved rest – of one day! Then I was back to running with a 10K race. There’s no stopping us is there?

I met Phil Sheppard that morning and we set off together to The Towers School in Ashford; so eco friendly with a car share! The weather was looking good and the forecast didn’t mention rain so we were hopeful. We arrived at the Race HQ in good time, parked up and followed the other runners to the school gym where we registered and collected our numbers and timing chips.

It’s probably a good time to mention here that this race was quite a big ‘thing’ for me. I hadn’t really seen myself as a runner for the first year or so of running. It was only after chatting to other Coastal Striders and hearing about and reading about races they had taken part in that I was inspired to have a go myself. I think the race bling was another attraction! So I decided that my New Year Resolution was to enter races, finally feeling like a ‘real’ runner. So thanks everyone for your inspirational stories and your encouragement.

Ok, so back to the race… the timing chip was firmly attached to my trainers and I was ready to go. Of course a trip to the loo was inevitable and on my return I bumped into another Coastie (recognisable by the famous orange and blue livery). It was the first time I had met Tony and we returned to the gym to find Phil.

After a while, we headed off a short distance to the race start. There were a fair few runners, I think about 350 but don’t quote me on that! I didn’t feel at all nervous which I had expected I might. All signs were good, Garmin ready, just waiting for the GO.

The race began and we set off. The start was busy and there was a fair amount of puddle dodging going on. At least the rain had held off for us but it had rained heavily the previous day and there were plenty of reminders for us to splash in. The route headed off into the rolling hills of the North Downs and followed the winding country lanes. The roads were closed to traffic and there were a few locals waving and offering words of encouragement; always welcome and providing that extra boost - so thanks to them. The middle of the roads were muddy and best avoided unless you wanted to slide all over; one poor guy fell right next to us but he was soon up brushing off the mud. The route was gentle with plenty of downhill sections…that was until the legendary 7k hill. There were whispers about this nemesis before we set off and I must admit it was on my mind up until we reached it…it was hardly a hill compared to those we run on Club runs but it wasn’t welcome at that point and with numb foot I did have to walk a bit. I will defeat it next time!

Phil still running with me kept me going and I was so grateful for his companionship and support. I think we helped each other and it was nice to have the company – what true Coastal Strider spirit. After the 7K hill, the route was a breeze but I was tiring. I actually started to enjoy it a bit more now the hill was behind us. A high-5 from a young boy helped me with a power-up to end the race with a PB. Guess who was waiting there to cheer us over the finish line? Tony with a great time himself and his return to running – well done. What a nice thing to do. The medal was gratefully received – first of the year so a special one indeed. There was even a slice of cake waiting back at race HQ which we ate whilst applauding all those receiving their trophies.

I can’t wait for my next race now! What was I worried about? Get out there and join in and earn that bling! It’s there for any runner whether you’re new to it or have been running for years and years! Being part of the Coastal Striders made me proud and I must end by thanking Phil yet again for sticking by me and running all of the 10k with me…oh and for the ride home too! Right, what’s next…