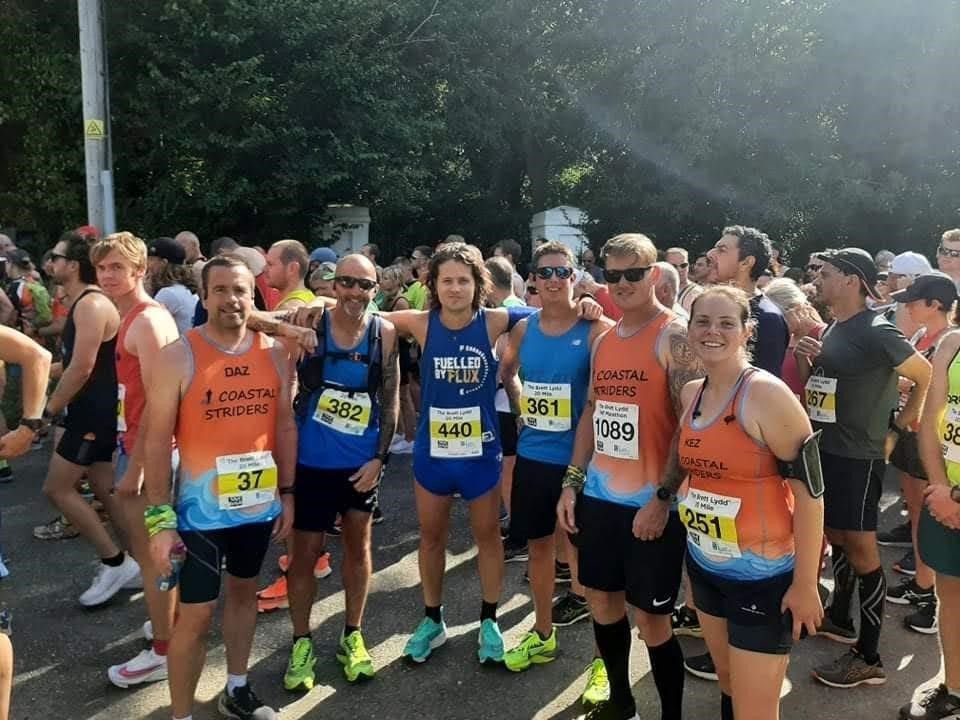 I hadn’t planned on entering this event, but having logged 0 miles of my 20 miles-per-week running goal, and long overdue a longer training run, I decided on the Friday night that if anything was going to motivate me to go out and get the miles done it was going to be an actual event. No going back, I signed up.

Meeting up with fellow club members Daz, Craig, Martin and Andrew in the hour before the run started, it became clear that this was going to be a hot and hard run in the exposed country lanes of Lydd. At the start line we met up with Kerry for a team photo, last minute energy gels and cuing up of playlists and podcasts - by which point my sunburn had already well and truly set in.

As soon as we set off I was reminded just how incredible some of our most accomplished runners are. Daz, Andrew and Craig were immediately up to an impressive pace, while I tried to focus on my own steady marathon pace and not get too caught up with the faster runners, or those doing the half-marathon distance who weren’t so concerned about conserving energy. Pretty soon I had lost sight of Martin and Kerry too, and settled into my planned pace listening to a podcast, trying to turn off my brain and ignore the stinging sun bearing down on my face and shoulders.

After just a few miles it was a surprise to see some runners already heading back to the start. First thought was that these were some exceptional runners who were already heading back after the slightly earlier start that was offered - but it turned out that the conditions were simply too much for some runners who had decided it wasn’t for them - but not the Coasties!

I stuck with my intended pace and plan, 8:30-9:00 min miles, and every 5 miles a brief walk, just long enough to take on an energy gel or drink (the water stations were every 3 miles and thankfully very well stocked). As soon as I was done with the gel or drink it was straight back to that pace, fighting the urge to drag out the walk for just a little longer.

At one point the route splits, straight on for the half marathon, or bearing right for the 20 miles. I cannot describe the urge to just head straight on and get it over with sooner! Turning right with the rest of the pack it suddenly felt more solemn, and strangely lonely as the number of runners around me suddenly reduced and thinned out. There were many more miles ahead…

From this point on I think I lost track of the time and the miles - but held a steady pace, with the exception of helping another runner who had collected a lost dog that had decided to join us on the run. Hopefully a marshal got him back to his owner not too far from home!

Approaching the turnaround point I first saw Andrew absolutely flying past, followed not long after by Craig and Daz, all looking strong and running at a great pace.

Once I hit the turnaround point myself the wind seemed to pick up, making it cooler but tougher going with the sun directly overhead and absolutely no shade at all. I soon bumped into a very determined looking Kerry, still smiling and heading for the turnaround herself. 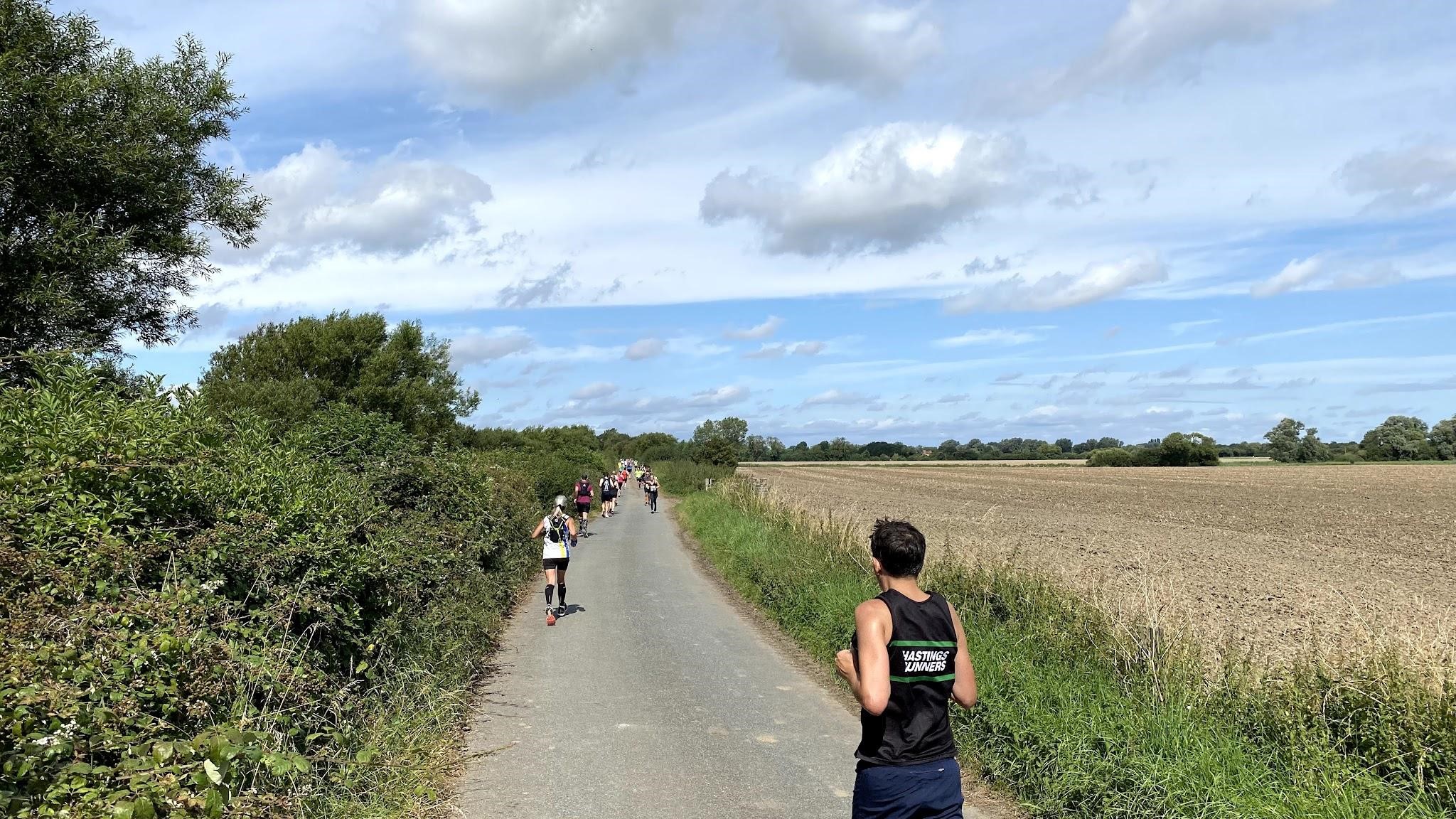 I can’t really say much more about the return journey; it was a strong headwind and I walked a little more than planned in the last couple of miles, and the last 400 meters seemed to be a wind tunnel making it feel like running through treacle.

Crossing the finish line at 3:00:57 (almost exactly on my planned 3hrs!), I was met by Andrew, Craig and Daz all looking annoyingly fresh, and with incredible and inspiring finishing times themselves.

Lydd is known for being a flat, exposed, and somewhat boring route - throw in an unrelenting midday sun, and getting over the line after either distance, at any pace, is an achievement to be proud of. Well done to all the Coasties for a fantastic day.

TL;DR: It was flippin’ hot.

This was a training run for the London Marathon, where I am raising money for Anthony Nolan in memory of our friend Natalie. If you want to read more about her story and more about the work that Anthony Nolan do, you can find all the details on my JustGiving page: https://www.justgiving.com/fundraising/spartanchrisuk 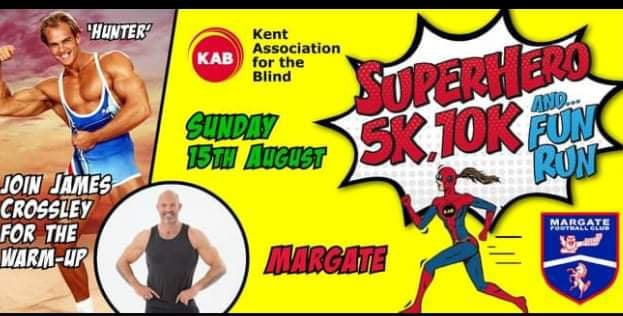 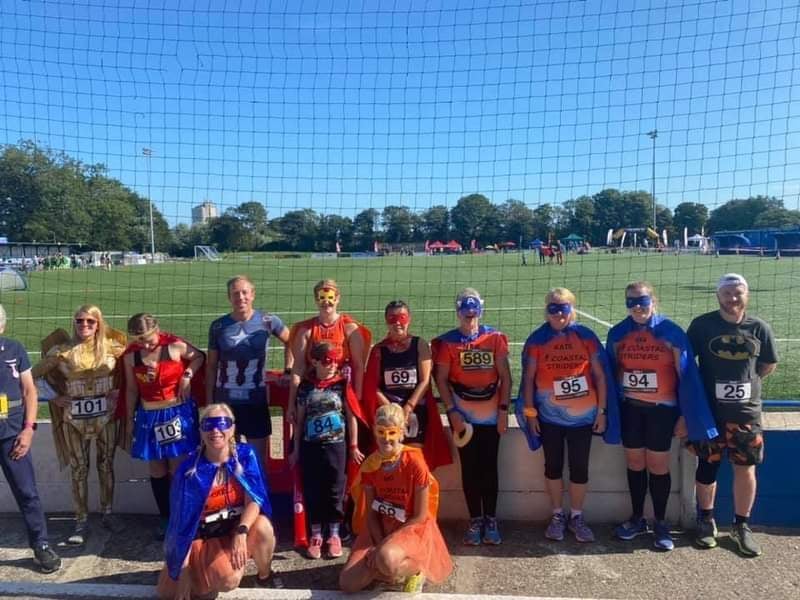 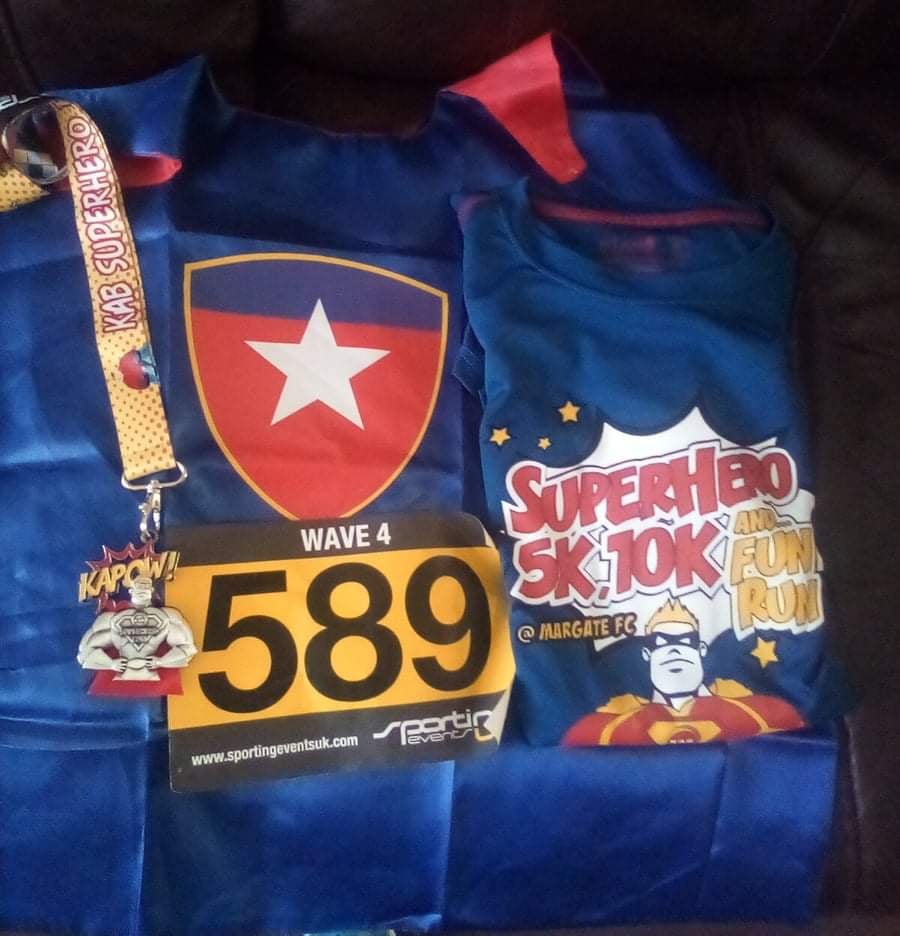 It was once again a great turnout of our Coastal Striders for the Super Heroes event organised by KAB ( Kent Association for the Blind ). Unfortunately, some of you who took part did not feature in pre run photo shoot (Taken by Carla's mum) as many were in disguise!

The runs were either 5K or 10k with a one mile fun run for the mini superheroes. This event was especially personal to me as KAB offer a lot of support for my family and organise fun events for my grandson, Jenson.

Most runners were there just for fun, others had personal reasons and were running in memory of their very own superheroes. Some of our group had also undertaken very long runs the previous day and still managed to finish the 10k! Lots of wonderful superhero costumes were worn on what turned out to be a very warm morning.

The event was well marshalled, starting and finishing at Margate Football Club's ground. We ran around Hartsdown park, then along Margate seafront with the 5k turning around before Westbrook and the 10k runners running to the end of the promenade. There was only one upward hill which was on the return route!

Spectators on the route were out with loaded water pistols and were encouraged to soak any willing runners who needed a cool down. It was great cheering back our runners although sometimes difficult to recognise when in costume! But as a group we got lots of mentions.

Our very own superhero, Mark Adelsberg was the first home for the Coastal Striders. The superhero T shirt and medal with a goodie bag and plenty of free water was an added bonus on what was a well organised fun day. 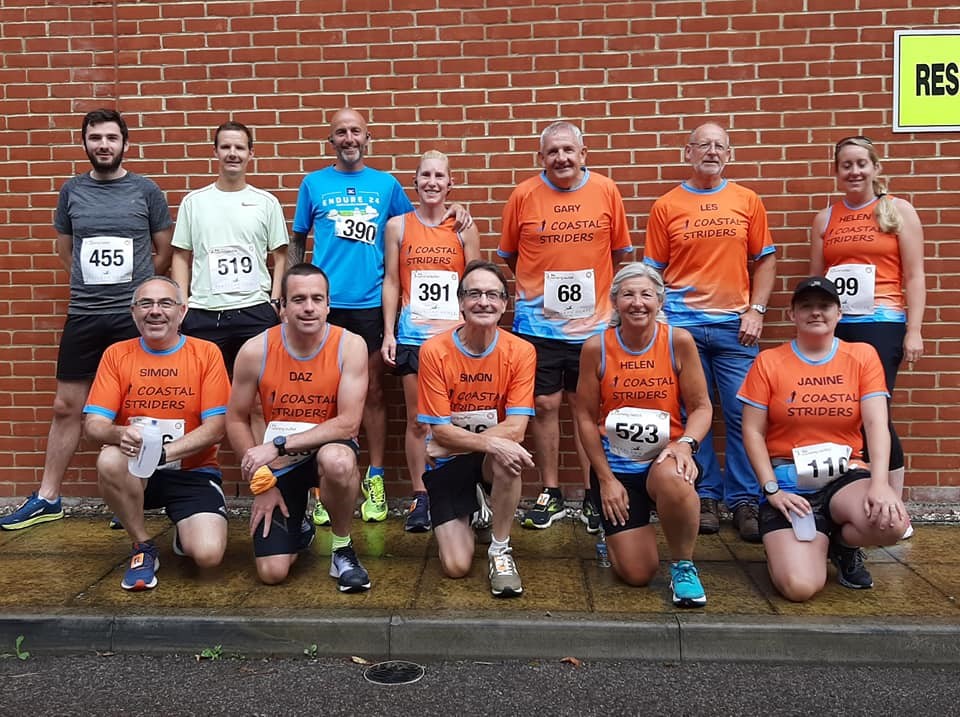 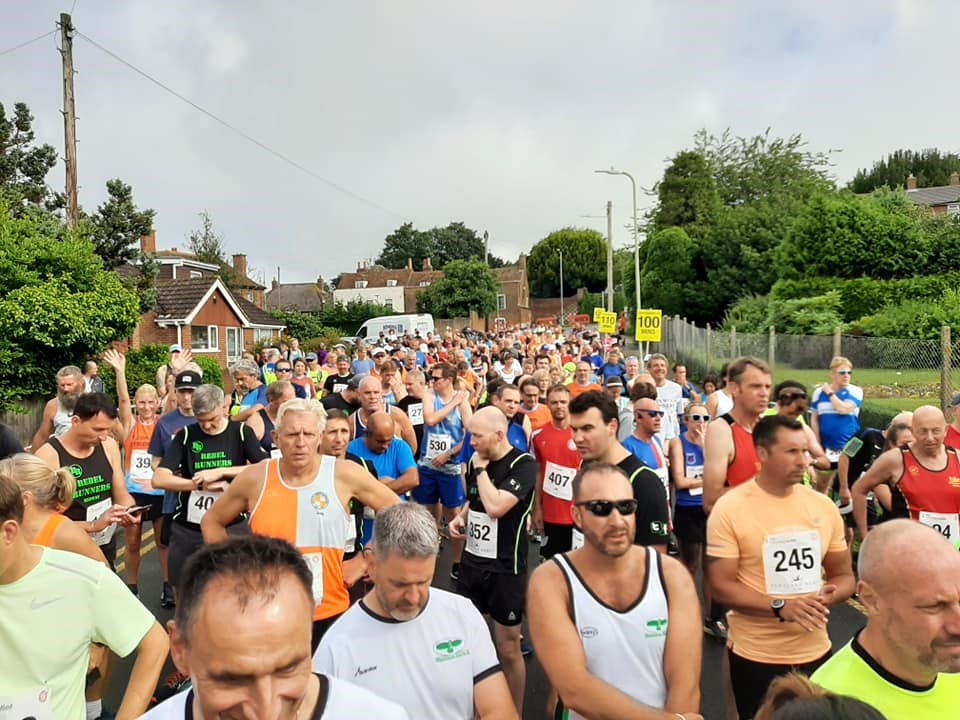 This was my first time doing the Canterbury 10, Darren Sayer had been trying to convince Craig and I to sign up for quite a few week’s beforehand, telling us was a great course it is with just ‘a couple of hills’.  Eventually we caved in.

So along comes Sunday 1st August, 7.30am we set off for Canterbury.  Half way there the heavens opened and even with the wipers on full blast it was difficult to see through the down pour. ‘This is a good start’!!!

Fortunately by the time we got there the rain cleared and conditions were good, cool and overcast.

The Race HQ was well set up in the Sports Hall with plenty of space for social distancing.  After signing in and the obligatory Coastie pre-race photo we made our way to the start line.

As I stood there waiting to go the ‘runners wobbly belly’ feeling kicked in, but I thought ‘I’ll be fine once I get going’…..9am, and we were off.  By 1.5 miles I had to do a Paula Radcliffe and literally threw myself in a nearby bush – embarrassing, but needs must (we’ve all been there)!!!

I emerged a couple of minutes later feeling much better but also feeling very annoyed with myself as I really wanted to try and aim for a PB in this race.  So I stepped the pace up a gear and had everything crossed I could make the time up.

The course is mainly country roads or farm land tracks so the ground was nice and even for running on.  Darren had told us that the ‘couple of hills’ were at mile 4 and mile 7.  As I approached mile 4 and turned the corner I was greeted by, what I can only describe as the Chine times by 4!!!  It’s the hill that keeps on giving, but I wasn’t going to let it beat me.  When I eventually got to the top the views across the fields and countryside were beautiful, you could see for miles.

The next few miles were undulating with a nice few long down hills, these sections were great for getting a bit of breath back and by this point I had found a lady who was doing the perfect pace that I wanted to be doing, so I settled in and stuck behind her……all too soon mile 7 approached and the next hill.

Unfortunately at this point my lovely lady pacer must have hit a bit of a wall so I had to get myself to the top, a quick flick through my music and found some upbeat tunes to keep me going. I think I must of being super heavy breathing because as I approached a lady in front she turned to the side with a look as if a steam train was coming up behind her!!

Anyway, I survived the second hill and from then on we were treated to some nice flat road with only a couple of little inclines before heading back towards the finish.

Heading over a little hump back bridge you make a turn to the left and can see the finish line and everyone is there cheering people in. I could see the Coastie colours of those who had already finished and that spurred me on, perfect for giving it everything you have left to get to the end!

This course is certainly not the easiest with those hills, but it is in really beautiful countryside and although I may have done a bit of swearing and lots of huffing and puffing along the way I really did enjoy it!

Maybe I will be back next time! 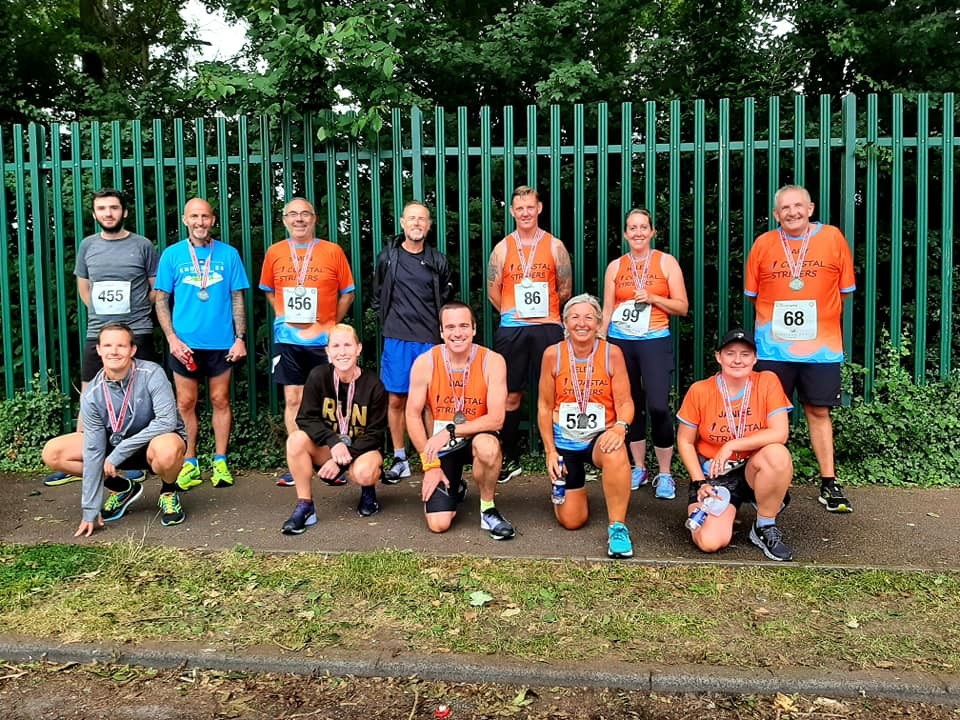