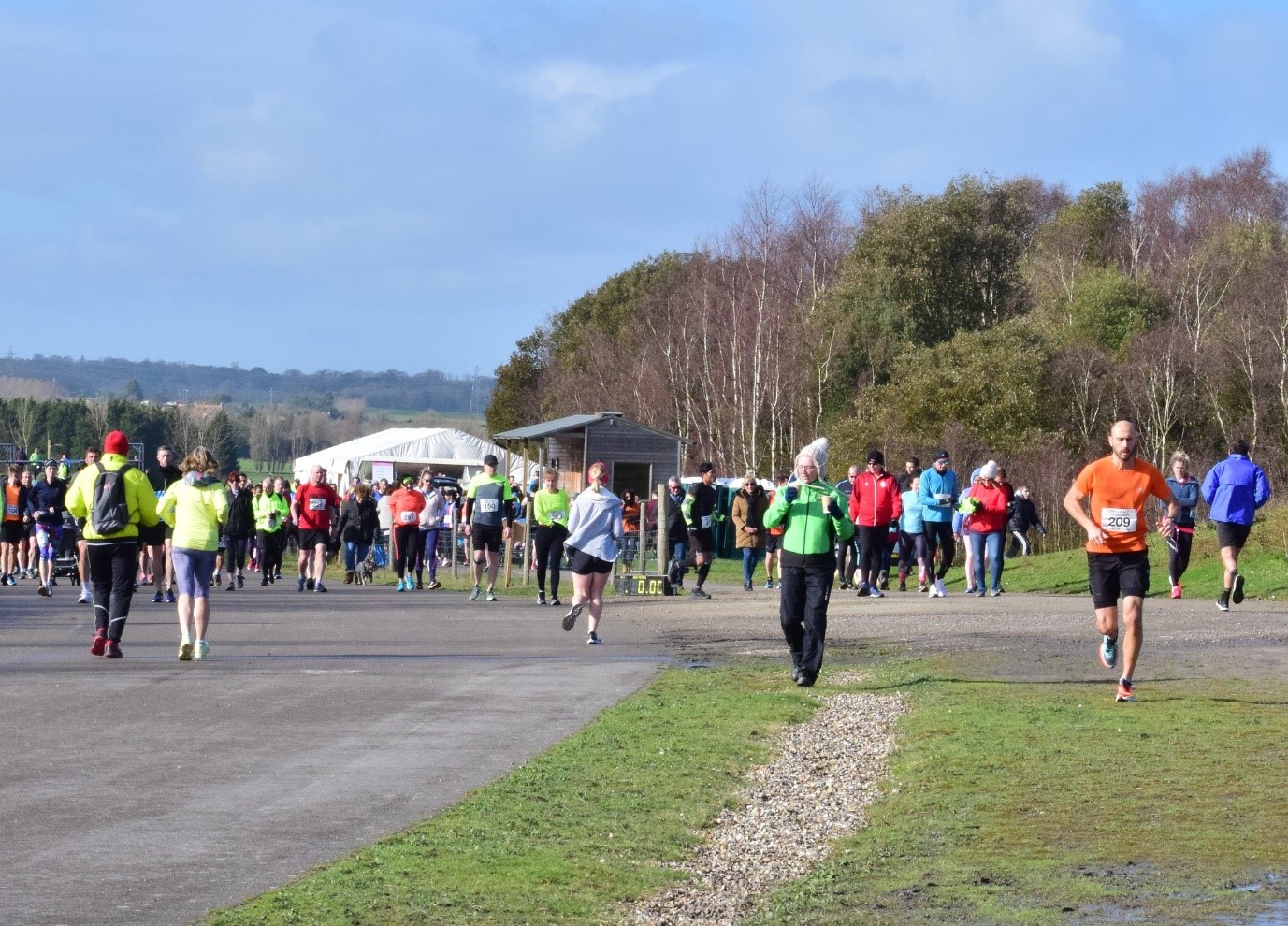 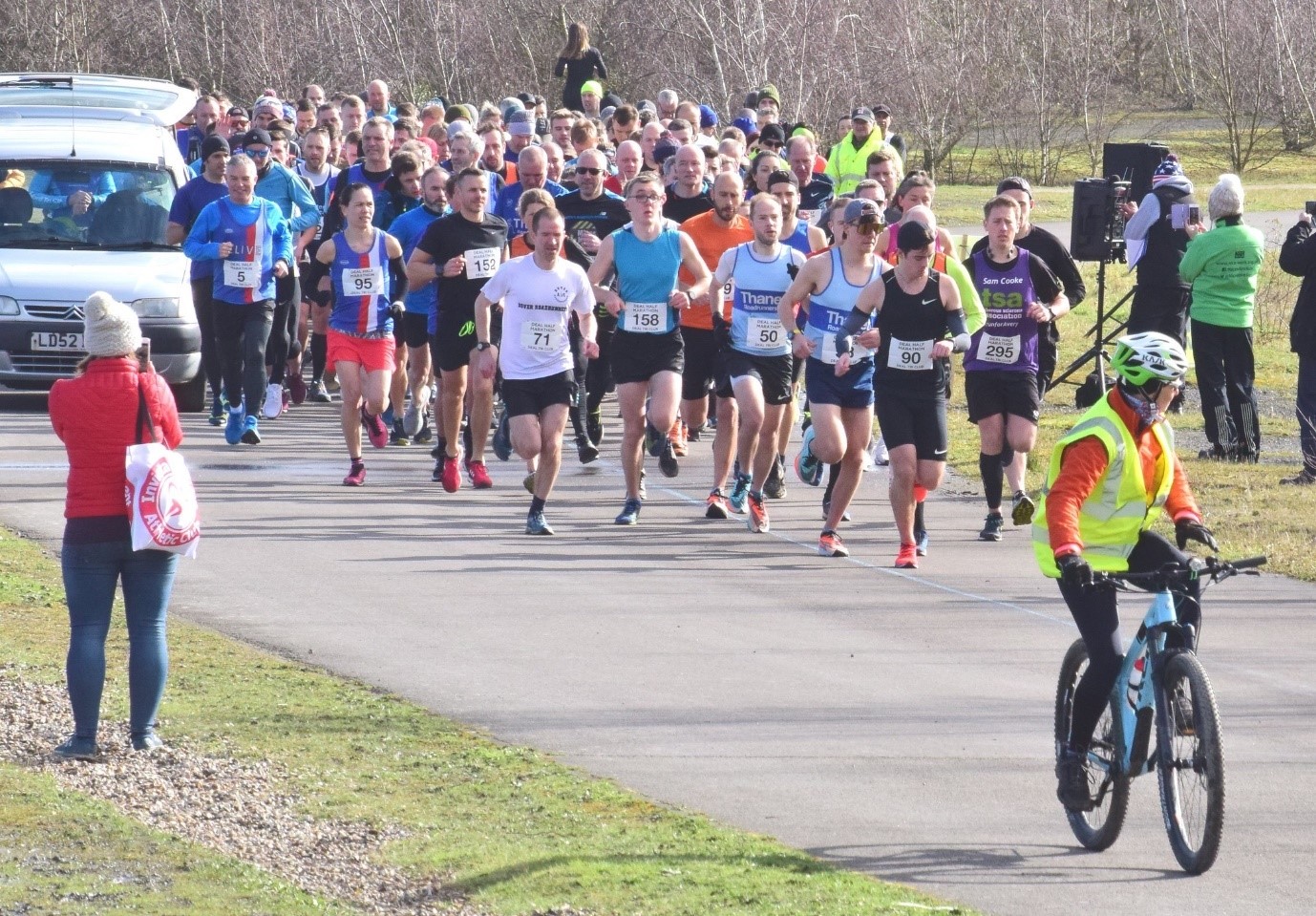 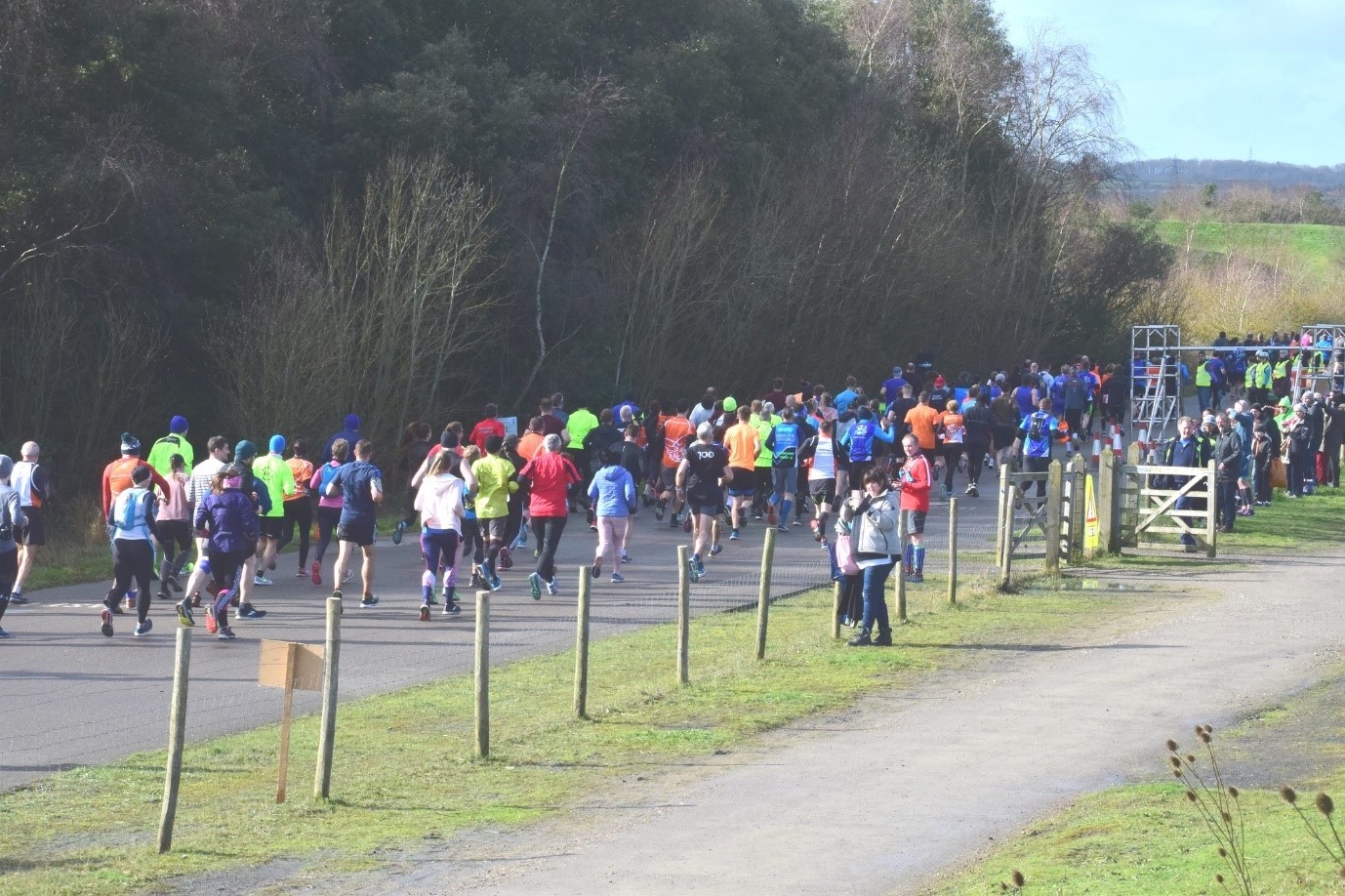 Store Ciara laid waste to the planned running of the Deal half marathon (2nd February), and many were left disappointed; they would not be able to take on the infamous hills that dot the landscape to the west of Betteshanger country park! No need to worry, a new date was hastily proposed for a replacement event (this has now become the norm for most large races!), but this time the route would involve laps of Betteshanger cycle track.

There were options to defer entry to next year or transfer to a different local event, but my failure to do either meant I was automatically signed up for the rearranged race. The new race took place on the 1st March, which luckily turned out to be free of any named storms (even though it was still a little windy).

The start of the race was located towards the top of the cycle track and the organisers had erected a marque to be used as the base for the event. Unfortunately, the tent had been put up right in front of the gravel path that surrounds the track, which was been used as part of the circuit for a SVN 6 hour challenge. As the SVN challenge had already started the runners taking part in this event had to pick their way through the Deal half marathon competitors, who had gathered in some number on the path! The race started at 10:30 am and whilst the number of entrants was probably lower than for the regular event, about 200 runners were at the starting line. The course started with 1 lap of the small top circuit followed by 6 laps of the full circuit. The event was slightly different to most, for the reason that all runners were either lapping or being lapped by other competitors before completing the distance. Also, whilst there was only one water station, there was plenty of opportunity to take on water if required, as this was passed 6 times before reaching the finish. The Deal half marathon progressed around the circuit in a counter clockwise direction, whilst the SVN runners were using the outer path, but in a clockwise direction, which added an interesting element (and I was also able to wave at John Whitcher on a frequent basis).

Apart from describing the scenery at Betteshanger there isn’t too much else to say about the event, with the exception that it was quite nice to take part in a race that utilised a supper smooth surface, nice gentle bends, no curbs and no cars, and ultimately the course was probably a good one for anyone after a PB.

Including myself there were a few additional Coasties taking part, delivering some great performances, which may be hard to beat on the regular course! 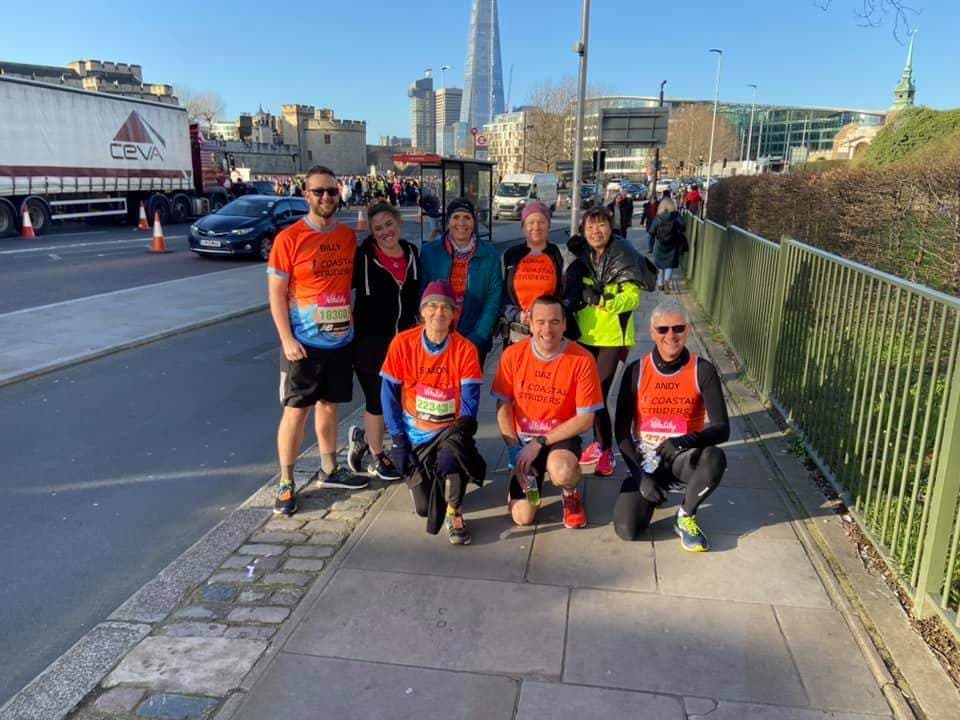 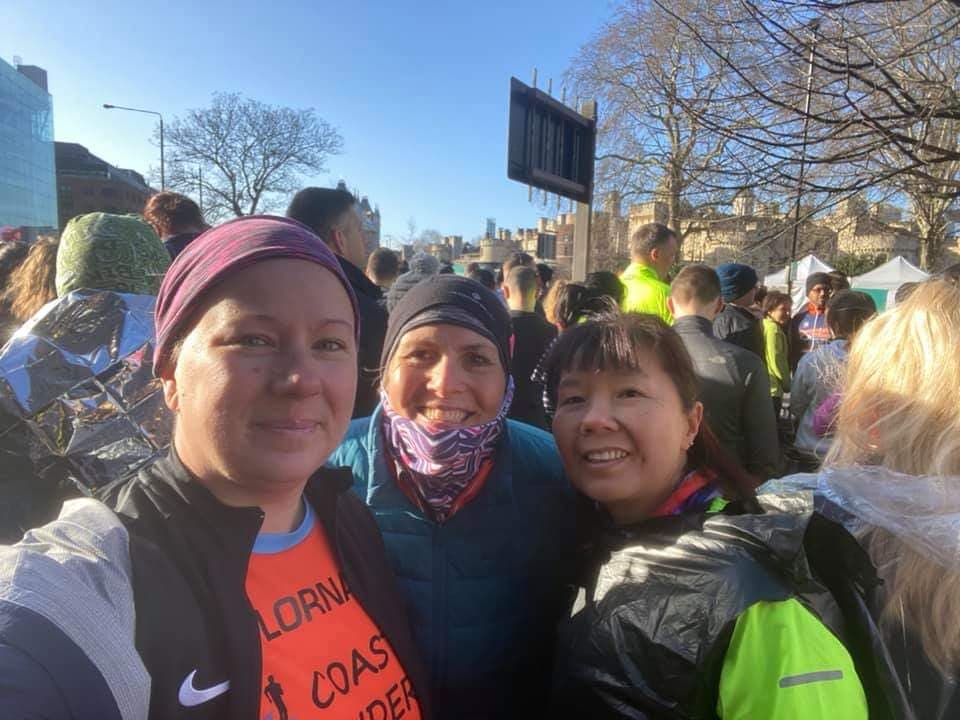 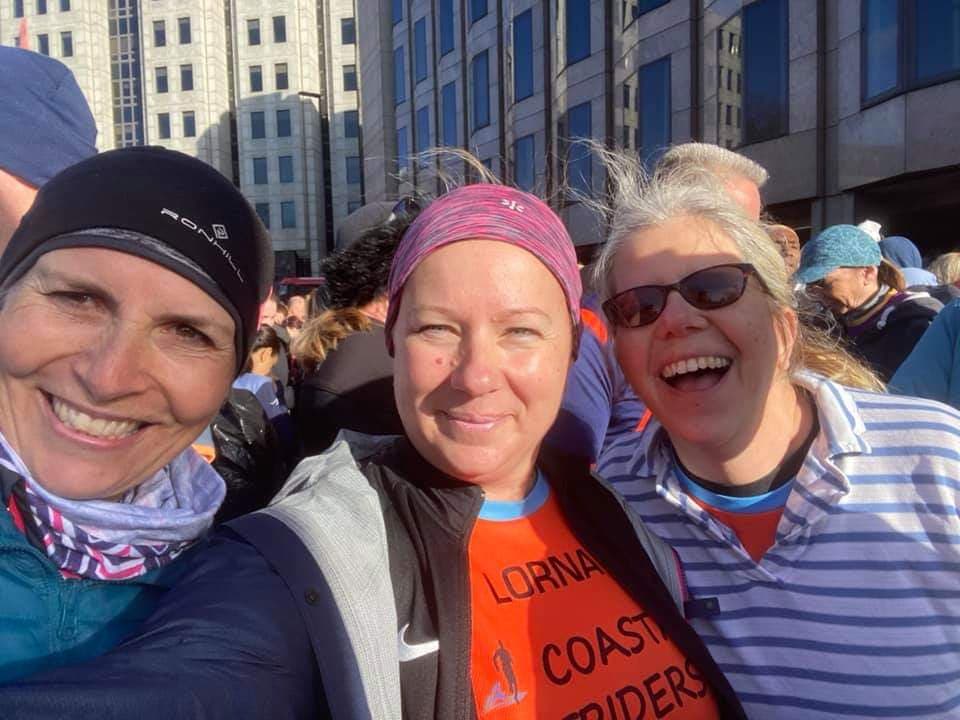 Travelled to the O2 Greenwich on the day, got on the TLR then had to change as got off the wrong stop, eventually made it to Tower Hill.  Dropped bag off and after numerous phone calls to Lorna, managed to meet the Coastal family for the traditional photoshoot.  Attendees at this event were:

Mark Munday and Kate Sayer for support, apologies if I have missed anyone.

We said our goodbyes and went off to our starting pens.  It was chilly waiting around for the race to start but there were snippets of the sun and you couldn’t have asked for better weather that day, especially after storm Ciara, Dennis and Ellen.  After standing around which seems like forever, the race started to move at snail pace, there were bouts of loud cheers as the runners started to move more rapidly and we’re off.

Many runners for this event use this as training for the London Marathon as the Big Half covers much of the same route. We headed towards the tunnel and eventually came across Billingsgate Market, Canary Wharf then Tower Bridge.  The atmosphere was electric with crowds lining the streets full of supporters, music and bands playing which gave you a boost. We passed the Boroughs of Southwark, Tower Hamlets, Lewisham, Greenwich where the race ended at Cutty Sark.

Every few miles there were water stations and at mile 7/8 they were handing out pouches of Lucozade which I have never come across, first time experience for everything. Someone shouted put it in your mouth and it will be burst, that I did, it gave you a very refreshing taste and a little pick me up so to say.

The crowd at the finishing line was amazing as it is with every race, however the postrace experience for many of us resulted in the huge delays in collecting our bags from the baggage area, due to the road not being closed off.  Hopefully a lesson learnt for next year.

The course was flat and I would highly recommend this event.

Well done to everyone who took part and to both our Captains, Darren and Lorna who are at most running venues, proud to be part of this running family.

Good luck to everyone with their upcoming races, hopefully they won’t get cancelled. 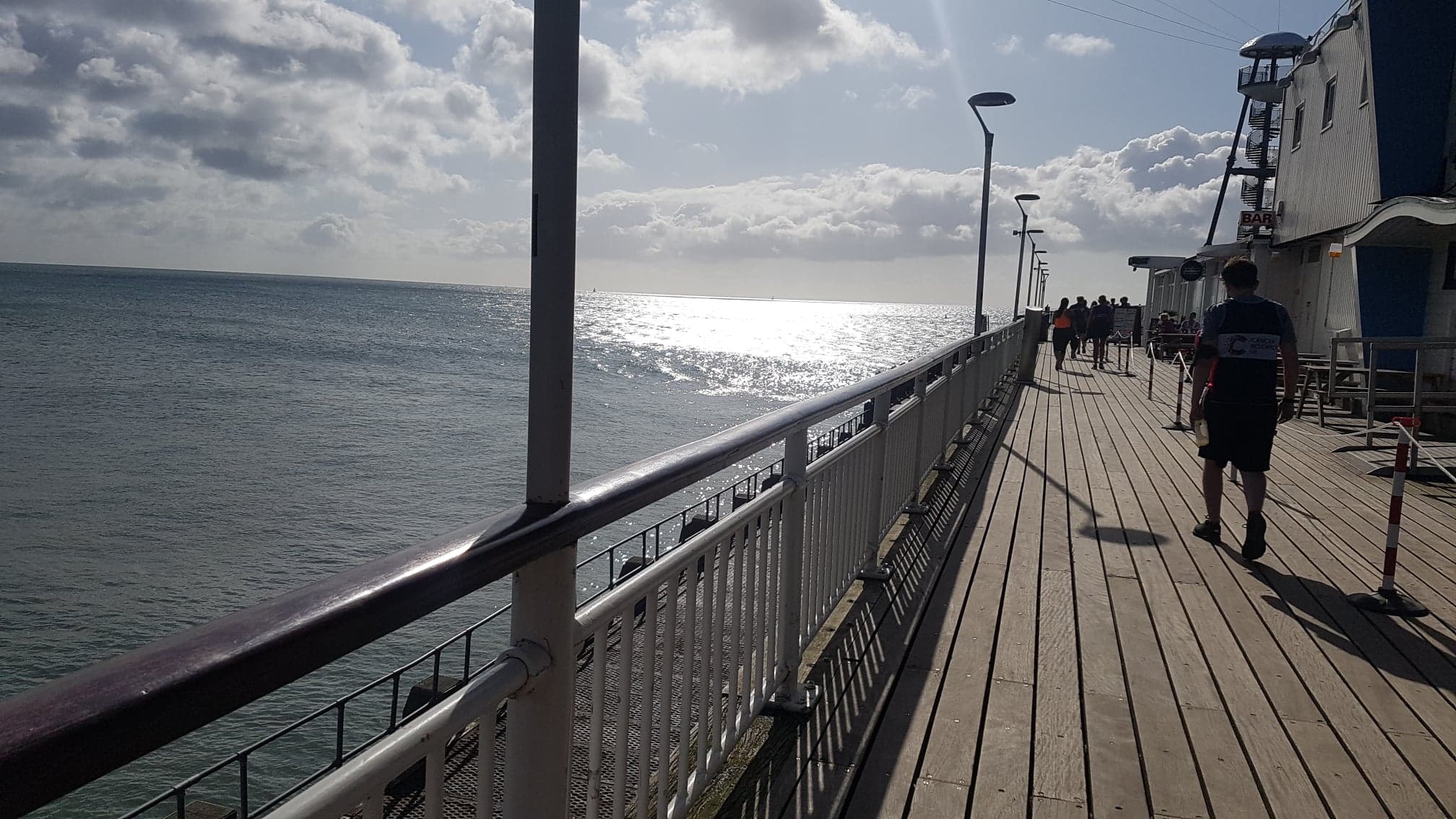 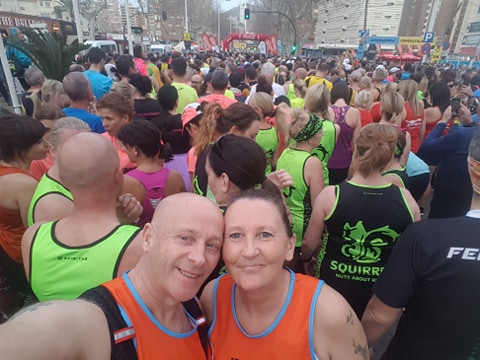 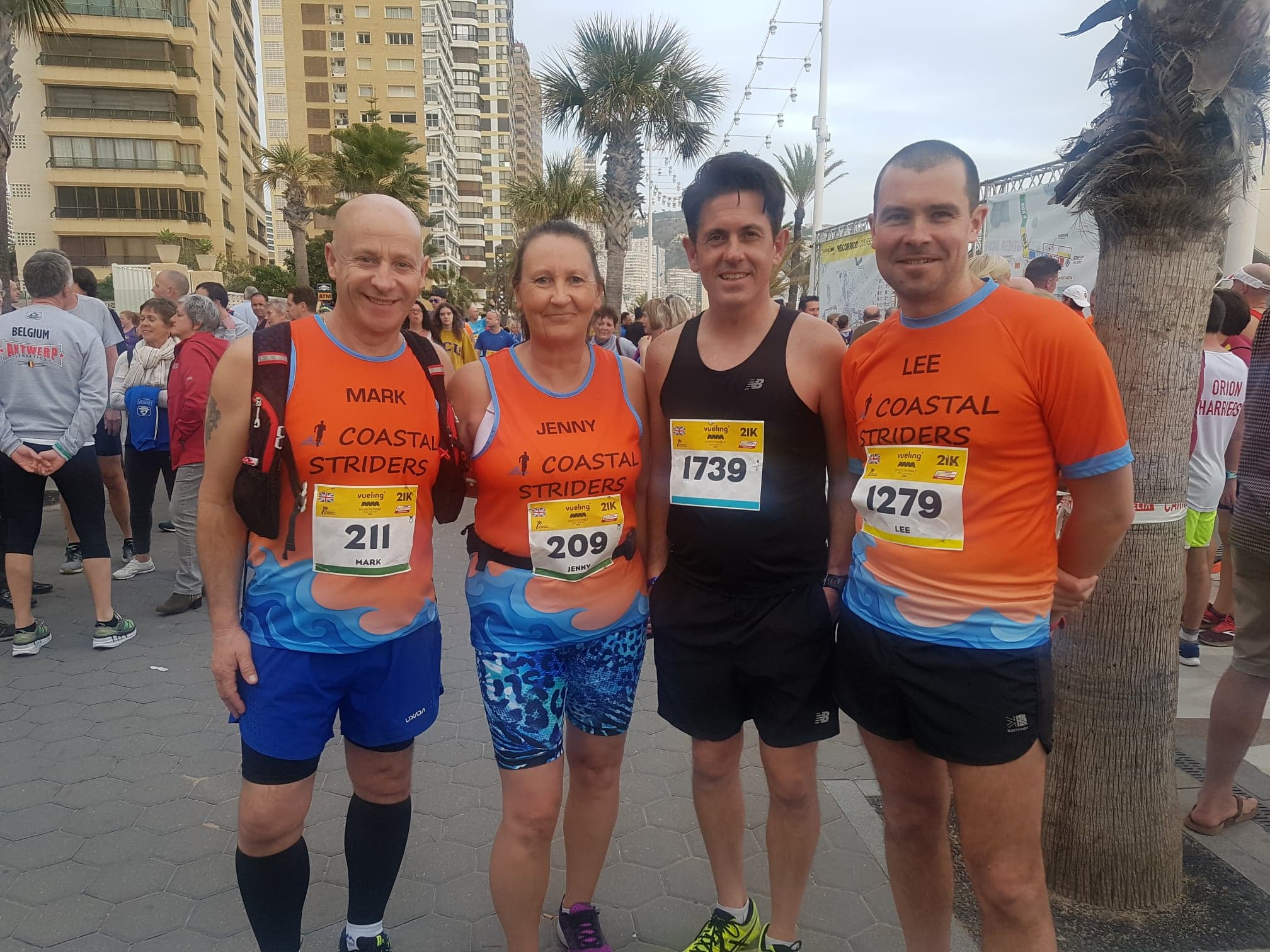 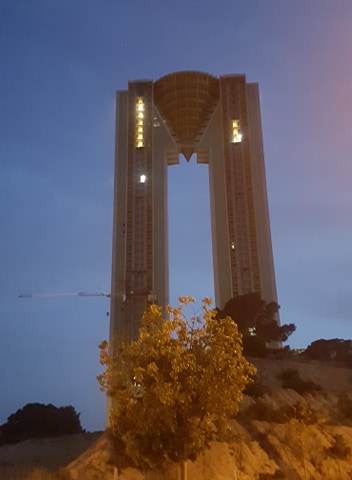 After the wet and windy weather at the Brighton half Marathon the week earlier we had a trip to Benidorm to look forward to.

The Race was being carried out in the evening starting at 18.30 so plenty of time to chill and pick up our race packs and T-shirts.

The weather was nice warm, ideal for a run.

There was a 10k and a Half Marathon with the half being 2 laps, which took us along the seafront promenade, through the Old Town and back.

As we were waiting for the start we bumped into a couple of other Coasties Lee and Rob, we took our international team photos and headed to our start areas.

The atmosphere was exciting and the crowds watching and supporting were in good voice as we ran through the busy streets then along the seafront up to the old town. This is where we encountered a couple of hills, one of which was known as Hell Hill for obvious reasons

Onwards and upwards we went and on the second lap around we noticed they had started removing some of the race signage and barriers. It was now more difficult to run, with the barriers down and the public walking along the roads it was also starting to get dark.

Anyway we could see a fellow runner up ahead with an orange top on (just like a Coastie at home) so we thought we were going the right way, WRONG

, he had slipped out of view.

We made our own way back with the help of Google maps on our phones which meant a slight detour and an extra mile to the finish line to collect our medals.

It felt great to run in shorts and vest again so roll on spring time.

We can thoroughly recommend running the Benidorm Half and next year we intend to run the 10k, knowing that we just need to run one lap and won't get lost.

Well done on your runs Lee and Rob.