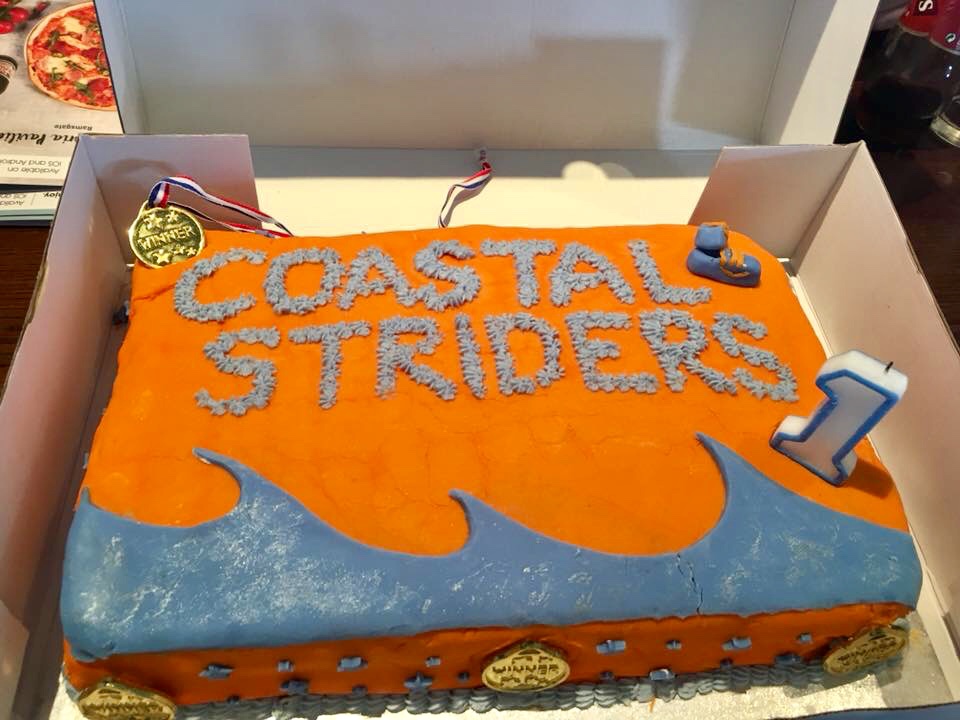 On Sunday the third of June the club celebrated its first year of existence by forming a communal gathering of members and their families at the Royal Victoria Pavillion Wetherspoon's pub. The party went off in style and ended with a multi-dimensional trip to the toilets!

A word from the Club President - Simon Ballard

So 1 year ago today just as I was exiting the car to walk over to the start of Palm Bay parkrun fate dealt me a hand that would change my future in a massive way! I learnt that day exactly what true friendship was all about when many of you looked at me for leadership and asked “what next?” By late that afternoon we had formed what was soon to be known as Coastal Striders running club.

We have had an absolutely amazing first year and have seen our numbers grow to over 150 runners! I could not have got this club up and running without the help of many of you guys the list would go on and on if I named you all but you all know who you are

I have been incredibly proud to watch you all grow as runners and I think now we have well and truly put our name on the map. We have a great team of qualified leaders now meaning we have been able to increase our number of sessions and offer sessions to different ability levels but most importantly the support you all give each other is amazing and is a major part of what makes our club so inviting to new runners.

Here’s to a bright future for Coastal Striders

wear your orange and blue with pride

Today was the 1st birthday of Coastal Striders and I am privileged to share this day celebrating with them all. I joined the club just 6 months ago as a beginner however in this short time I have made many lovely and supportive friends from all walks of life. My day began with a very hot 10am all abilities Coastal Striders group run, although the heat was intense spirits were high and everyone was looking forward to celebrating later on in the day at The Royal Pavilion.

Immediately after the run a few of us headed over to Minis Bay to support some of our fellow Coastal Striders who were running marathon distances. When we arrived Darren Sayer, James Patterson and Simon Ballard had already completed their runs, however we were lucky enough to have the chance to cheer Paul Preston across the finish line. It wasn’t long before we spotted a couple of our distinctive orange and blue shirts in the distance, it was Helen Tremble and Gary Channing on their final leg and running alongside was Les Brown supporting, we ran towards them and supported them for their final 100 metres, they were looking strong and in good spirits in spite of the soaring temperatures they has endured throughout the day.

At last it was now time to start the birthday celebration together. I had been busy the previous day making the Coastal Striders' 1st Birthday cake, unsure of the number of club members to cater for I assumed it would need to be a substantial size due to the popularity and size of the club. I arrived at The Royal Pavilion at 3.30pm and it wasn’t long before others began to arrive, soon after I noticed the whole section of the ground floor was taken up by members and their families of Coastal Striders, it was lovely to see everyone together dining, drinking and laughing together and it made me realise how lucky we all are to have such an incredible run club.

I feel honoured to have made the cake and am delighted I was able to share it with so many lovely people, after all it is the individual members of the club that make it what is. I look forward to celebrating many more years ahead and providing many more cakes. 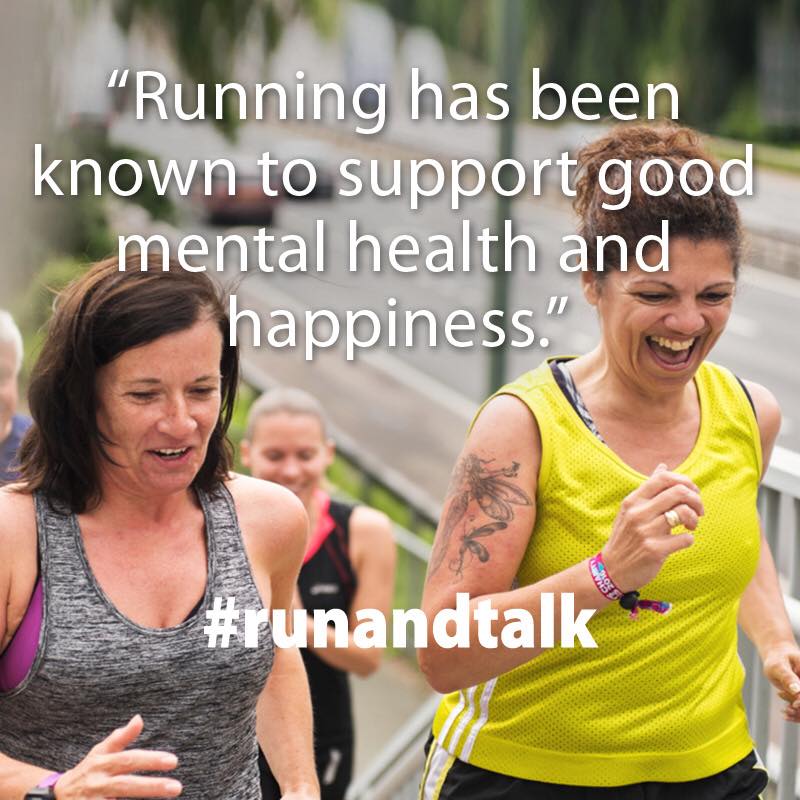 We are pleased to announce we have been appointed two Mental Health Champions for the club as part of the #runandtalk programme. This is an England Athletics initiative for affiliated running clubs. Supported by Mind, the mental health charity, the aim is to improve mental health through running.

Congratulations to Jo Carnell and Emma Dickerson who have been appointed as our Mental Health Champions. Their role enables support for people to access the mental wellbeing benefits of running, remove stigma and get people talking about mental health.

We look forward to seeing the positive impact the club’s Mental Health Champions will have on members of our club and the wider community. We are a free running club, that caters for all abilities. You too can help improve your physical and mental wellbeing. Come along to #runandtalk

55 of us represented the club at the birthplace of Parkrun - Bushy Park and we managed to make it into their newsletter!

You can read all about it by following the link below:

Read about it here 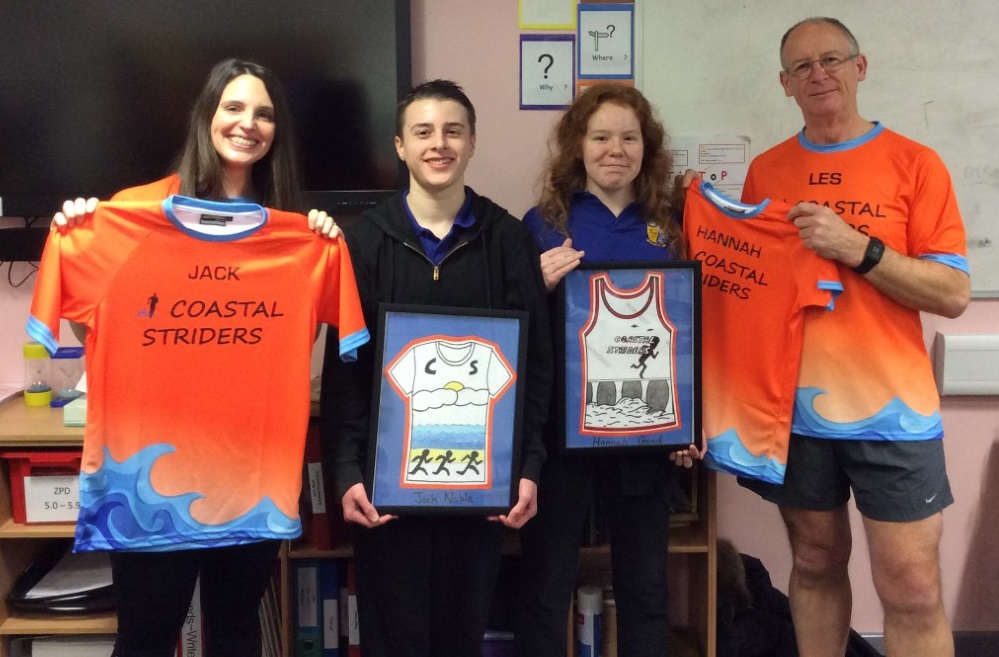 A very exciting day for us at Laleham Gap school, since the pupils had no idea we were coming!

When Coastal Striders formed back in June 2017, we had a very important job that we needed help with; designing our club shirts. Our club colours Orange and Blue were already voted as a firm favourite by our members, but the design that would form the future identity of the club, we really became stuck on.

Mrs Boyes, a member of Coastal Striders herself, spearheaded a competition for her Year 9 class to help in our quest. We were astounded by the array of design entries that followed. We enjoyed seeing the creativity amongst the designs, which the pupils clearly put in a lot of thought and effort to. Picking one winner was going to be an impossible task!

The winners were kept tight lipped until our presentation at Laleham Gap School. The pupils were talked through the process of designing a shirt, as well as the key elements to consider being a club governed by England Athletics.

We decided to incorporate the designs of both Jack and Hannah, as they each represented our Coastal presence and added a fun element that our club brings. The crashing waves and our new club logo of a runner seen in both designs, I’m sure you’ll agree make for a very striking and impressive club shirt which can now be seen pounding the streets of Ramsgate.

We were honoured to announce Jack and Hannah as the competition winners and see how ecstatic they were to have their designs brought to life.

As a Thank you, Les Brown our Treasurer and Club Secretary Emma Dickerson had a final surprise in store by presenting Jack and Hannah with their very own Coastal Striders club shirt.

Sincere thanks to Laleham Gap School, Ramsgate for all your help and patience in this process and warmly welcoming us into your school. The children and staff were so friendly and inquisitive, the experience was a real pleasure. Also, of course, thank you to the stars of the day, Jack and Hannah. We may have even inspired some new runners along the way, who knows!